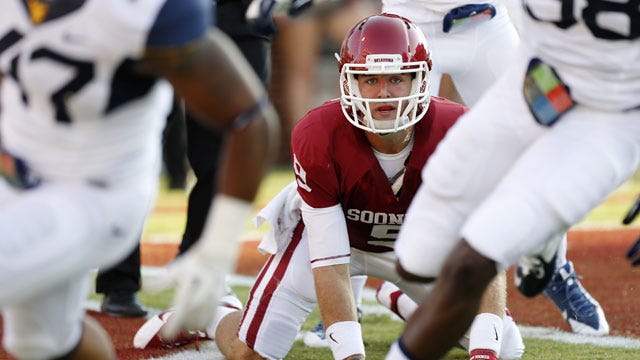 National championship contenders are made by facing and dealing with adversity. For Oklahoma, the first three games of the year—two home games and a short trip up to Tulsa—haven't given the Sooners much to overcome.

This week, that all changes. The Sooners travel to Morgantown on Saturday to take on West Virginia to start Big 12 play.

The trip and opponent are plenty for the Sooners to overcome, as the Mountaineers seem to have turned things around after a terrible 2013 season. The offense is humming once again and WVU has played well through the first three weeks of the season, nearly knocking off Alabama and defeating Maryland on the road last week.

Not only will the Sooners have to deal with the Mountaineers on the field, but the ones in the stands will also be a factor. Oklahoma players talked about the WVU fans this week, recalling their rabid nature from their 2012 trip to Morgantown.

Finally, Oklahoma will go into this game without running back Keith Ford, who has a broken fibula and will be out the next few weeks. Cornerback Zach Sanchez has a shoulder injury that won't be going away any time soon and there are several other players who have been dinged up at some point this year.

All those factors combine to make Saturday a bit of a tricky situation. People aren't calling it a prime upset chance, but everyone is aware of how difficult this game will be for the Sooners and know it's not to be taken lightly.

The images of Tavon Austin running wild through the Oklahoma defense two years ago is enough to make any OU fan worried. But these are two completely different teams from their 2012 editions. The Mountaineers don't have playmakers as good as Austin or wide receiver Stedman Bailey—both with the St. Louis Rams now—and the Sooners' defense couldn't be farther from the one that was shredded two years ago.

This year's final probably won't touch the 50-49 score of 2012, but it very well could be just as back and forth. But if the Sooners really want to be taken seriously as a national championship contender, they'll take care of business and not allow West Virginia to hang around.

How teams respond to adversity separate the contenders from the pretenders. The Sooners face arguably their biggest test of the season on Saturday with a tough opponent in a hostile environment. It's just the kind of test the Sooners need to pass to continue to keep their hat in the ring of those vying for a place in the inaugural College Football Playoff.

1. How will the run game fare without Keith Ford?

Through three games, Ford has been the Sooners' best running back of the three-man rotation, but the Sooners won't miss him as much as people think. The Oklahoma offensive line, as massive and experienced as it is, makes up for the loss of Ford. The Sooners can put a number of backs in the backfield and not see a huge dropoff in production. When two of those backs are Alex Ross and Samaje Perine, who have been impressive so far this year, that production drops off even less. Perine in particular will be counted on to carry the ball a lot, thanks to his massive body and ability to absorb a lot of contact. Also, don't be surprised to see Trevor Knight run the ball a bit more in this game.

2. Can the defense stop or limit the West Virginia offense?

Offenses like West Virginia's are very difficult to completely shut down, but it seems like the Sooners have all the tools required to do so. There's athleticism at every level of the defense. OU has a great speed rusher in Eric Striker, a deep and talented secondary and a chip on their collective shoulder from the embarrassing performance of two years ago. West Virginia will probably score some points, probably 20 or more. But if the Sooners make those points come more difficult than normal, that should be enough.

3. Will the Sooners get more varied production in the passing game?

West Virginia's best cornerback Daryl Worley has been suspended indefinitely and that's a big loss for the Mountaineers' defense. However, the Sooners haven't gotten a lot of production outside of their three starting wide receivers as far as pass-catching is concerned. OU coach Bob Stoops indicated this week he wasn't overtly concerned the majority of the catches came from the wide receiver position, rather that passes are caught. If there was a time for the OU wide receivers to get into a better groove, it could come on Saturday against a backup cornerback.

Trickett has completely resuscitated his career after an inconsistent and injury-plagued 2013 season. Trickett has faced the Sooners before, coming on in the second half for E.J. Manuel in the Sooners' 23-13 win over Florida State in 2011. Trickett has a much better grasp of the WVU offense this year and threw for 511 yards last week against Maryland. The Sooners will need to rattle Trickett and keep him from getting in a rhythm.

White has emerged as a dominant wide receiver this year, ranking second in the country in both receptions and yards through the first three weeks of the season. White is a big guy at 6-foot-3, 210 pounds, so he'll command a lot of attention from the OU secondary. Look for Julian Wilson to match up with White most of the night, thanks to his comparable size.

Joseph is a very experienced player, starting all 28 games he has played for the Mountaineers in his three seasons at WVU. Joseph is small in stature, but plays bigger than he is. Unfortunately, his job just got a lot more difficult with the suspension of Worley. While he won't be lined up in man-to-man coverage much, he'll have to worry about helping the Worley's backup, exposing the other side of the field a bit.

The players may be different, but the OU defense is experienced enough to have plenty of players who were embarrassed by Tavon Austin and the Mountaineers two years ago. You'd be kidding yourself if you thought Mike Stoops wasn't reminding his unit about that game all week. It's a bit of a redemption week for Stoops as well, as it was his unorthodox scheme that allowed WVU to do what they did in that game. The key for the Sooners is to make everything difficult for the Mountaineers. If they can do that, the Sooners should be just fine. The problems will come is OU allows Trickett and the offense to get in a consistent rhythm. Things could get out of hand quickly.

The Sooners defense once again flexes its muscles, rattling Trickett and shutting down the WVU run game. Oklahoma isn't spectacular on offense, but once again does enough to get the win.