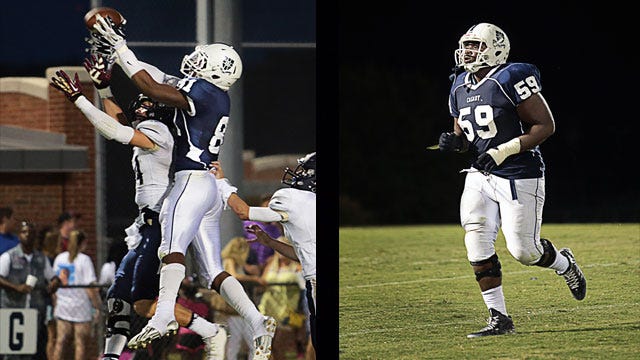 The scene across football has not been pretty the past few months. Instances of domestic violence and other wrongdoing have littered the landscape, leading to the suspension and/or dismissal of several big name players.

College football has not been immune to these issues. Oklahoma, West Virginia, Tennessee, Texas and others have suspended or dismissed players for off the field issues in recent weeks, and that just scratches the surface, covering some of the more egregious crimes committed by players.

All this begs the question, how do recruits feel about all these issues and how the colleges discipline wrong doers? After all, current high school players are going to be spending several years at these institutions and take into account whether they'll be living under a dictatorship or have free reign to do what they want. The consequences of their actions are also taken into account.

“You get to talk to these guys throughout the recruiting process; you get to meet them at different camps and you get a better feel for them the longer you're around,” Casady offensive lineman Josh Wariboko said. “Strong discipline means you take your program seriously and how you want to portray themselves to the public, the community, everyone else.”

Wariboko along with teammate Denver Johnson and Midwest City standout Will Sunderland were interviewed for this story. All three are among the Oklahoma City metro's top Division I recruits, with Wariboko and Sunderland—an Oklahoma commit—making the ESPN 300. Johnson is a three-star wide receiver who is committed to Iowa State.

All three have evaluated the discipline structure of the schools that have recruited them over the past few years to varying degrees. For the most part, their thoughts on various schools are consistent, but one Big 12 school experiencing a change in philosophy produced mixed thoughts.

“I don't want to go to a program where they have strict rules like Texas,” Sunderland said. “I feel like every kid should have their freedom. Coaches are going to be coaches and obviously you have rules, but most coaches out there try to take over stuff like curfew at 9 o'clock. No kid around the country is going to want to do that.”

But there are actually plenty who desire structure within a program. Wariboko and Johnson both enjoyed the discipline Charlie Strong is trying to implement in Austin, and on both their visits, they heard firsthand how current members of the team feel about the changes.

“They all loved the new coaching staff and the new structure that the program had,” Johnson said. “The ones I talked to were all accepting of it.

“I don't know if it (discipline) was lax (under Mack Brown), but it was not as strongly enforced as with the new coaching staff.”

The current players are the windows into a program for recruits. As Sunderland notes, the coaches are salesmen during the recruiting process, trying to sell their program to the best football players in the country.

Right now, the coaches are loving you but when you get there, it's business,” Sunderland said. “You're not a five-star or a four-star recruit anymore. You're a freshman and you have to work your way to the top. When high school is over, it's a different story. They're still going to treat you well, but at the end of the day, they can be rough on you, hard on you.”

The players obviously care about the future of the program, but their job isn't dependent on building a winning culture like a head coach and his staff's are. Wariboko said players are going to be the most honest about where a program is because they ultimately don't care nearly as much where a recruit ends up.

“It just depends on what you like and what kind of person you are and how you fit into the school and program socially,” Wariboko said. “You want to talk to the players and that's where I get most of my information from because the coaches, their job is to recruit you but the players are already there. They're working out every day, practicing.”

As teammates, it would be very easy to become divided if discipline was not administered fairly to someone who had gone astray of the rules. Those divisions do nothing positive for the locker room environment and the unity programs strive for.

“If one of us messed up and he (head coach) let us go without any punishment just because you were a certain name on the team and the team knows if it was any other player that wouldn't be the case, it would create a division which hurts the team as a whole,” Johnson said.

Johnson added the recruiting process doesn't exactly help players stay humbled. They're being courted by coaches from all over the country with promises of stardom, potential championships and a road to the NFL. It's easy to see why some college football players come to campus so entitled and how discipline problems can arise so quickly.

“When you're a high recruit and a five-star guy, you can get special treatment,” Johnson said. “You get used to special treatment from every level, you can get detached from reality. When you do certain things, you think your actions don't get punished. You can get a reality call and it will bring you back down.”

No school is perfect and all three players have had to sort through a lot of noise surrounding several programs. Wariboko said several people had a lot of negative things to say about LSU, but when he visited, he found those things erroneous. While a program may have its warts, Wariboko said he is looking for the right program for him, not the perfect program overall.

“If I feel like it's the right place for me and I see myself reaching my potential and all the goals I set for myself there, I'm still going to go,” Wariboko said. “Then it becomes on me. Am I going to let myself go into situations and get in trouble? Am I going to throw away my scholarship and the opportunity to attend my dream school just for this moment here?”

There are players getting disciplined at every school for a variety of things. The difference between the average program and the ones to avoid is a pattern of running afoul of the rules or the law.

“You can kind of look at it and see if there are two or three players from this team always in the news, you can assume the program is kind of lax when it comes to discipline,” Johnson said. “But if you're looking at just one incident every now and then, you can't blame the program or hold them responsible.”

Discipline will always be a part of the maturation process and college football players are still in that process. As long as players are making mistakes and getting disciplined, future players are going to evaluate how schools do that and allow that to affect their college choice.

It's not something people think about, but in light of the past few months, it's very relevant.