News 9 Investigates The Phenomenon Of RODS 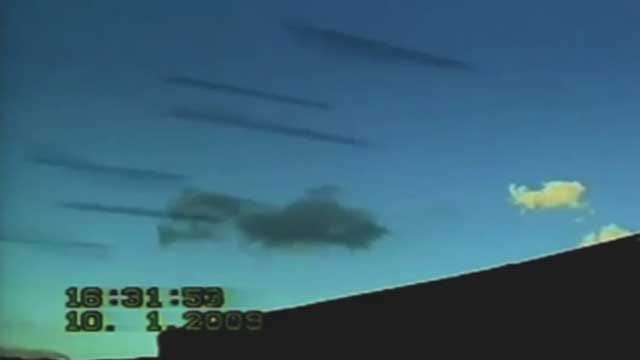 Cameras capture a variety of moments in time, but sometimes they capture something else, something unexplained. One man from New Mexico believes he's discovered a new life form, which has spurred a worldwide debate.

"There is a phenomenon that exist among us," said Jose Escamilla, founder and researcher of RODS. "They're like sky fish. They swim through the air like fish."

He first captured a strange image on his photographs back in 1994.

"At first I thought they were insects, birds you know floating close to the lens of the camera," he said.

However, at such a high shutter setting, he says he eliminated the possibility of it being an insect or a bird, but something else, something mysterious.

"We think it's a living entity of some kind. It does have behavior of being alive," said Escamilla. "They're very evasive, they're super fast."

Escamilla calls this entity a ROD, measuring one to six feet long with a cylinder body and multiple sets of wings.

"We don't know what they're doing here. We don't know how long they've been here," he said. "We have rock carvings that appears to show RODS on carve drawings from 50,000 years ago."

Skeptics, however, don't buy into the ROD theory. Skeptics like Mark Zimmerman, an assistant Professor of Photography at the University of Central Oklahoma in Edmond.

"I hate to call myself a skeptic, but I'm probably labelled as that because I just think there's some sort of scientific answer for things like this," said Zimmerman. "I think it's interesting and makes for a good topic of discussion."

In fact, he discussed the phenomenon in class recently after one of his students, Erick Perry, captured what appears to be a ROD in a photograph taken for a class assignment.

"It was actually somebody in class who pointed it out," said Perry.

As part of the assignment, Perry took the same photograph at a cemetery during different times of the day. In the night photograph, a white object appeared in the upper right-handed corner.

"People in class joked around about it, like UFOs, but most likely, it was probably like a bug or a plane or something," he said. "The fact that it was in a cemetery made it a little more creepy."

Zimmerman agrees the object is more than likely not out of this world.

"You can capture planes as they're going across the sky, satellites, things that you typically wouldn't see other than like a dot typically when you look up," he said. "Whereas with the longer shutter, when it's open, things will move and light will reflect off of it."

Wanting to prove his point, Zimmerman shot a series of photographs at different exposure times around a porch light, capturing what appears to be objects similar to Rods, but actually turned out to be moths. Like other camera experts, Zimmerman says cameras are capable of producing artifacts, something in the picture that wasn't actually there.

Escamilla viewed Perry's photograph from class and says the mysterious object is not a ROD, but perhaps an airplane. However, he says that doesn't disprove his ROD theory.

Escamilla says RODS can be seen anywhere but their hotbeds are in Washington DC, New Orleans, Canada, Mexico, Texas, Arizona and California the U.S. He says they've also been captured in Scotland, Russia, Japan, China, Germany and the UK.

Escamilla has seen RODS in photographs and video of space and even underwater. He even spied a ROD in video taken from SkyNews9 during tornado coverage in 1999.

"Those RODS are huge. That one white ROD that comes out of the top of the cloud, that cloud front was 10 miles away from the helicopter and it comes out in three frames. That thing must have been a 100 feet in length," said Escamilla.

So what do you believe? Do rods exist among us, these strange living things that appear and disappear in the blink of an eye, caught at just the right moment in time?

"I think everyone always has some sort of conspiracy on anything. I mean, it could be Bigfoot," said Zimmerman.

"This phenomenon is real and for those of you who don't believe in it, that's your prerogative. You can believe what you want, or disbelieve, but the fact is, these things are here," said Escamilla. "They are doing something here. We don't know what they do but they are doing it."

Escamilla says technology has improved the documentation of RODS, where he's now able to capture them using infrared filters and in high-speed footage.