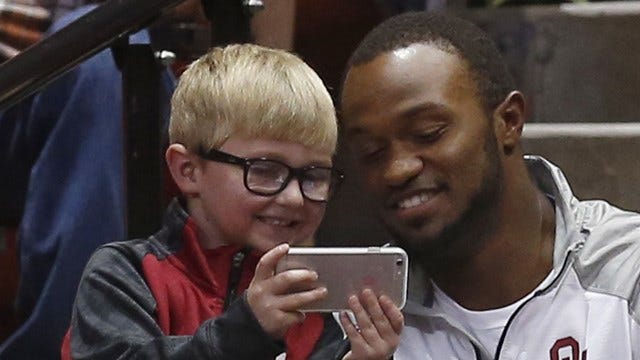 Life has been a little bit different for Samaje Perine since his record-breakin performance on Saturday against Kansas, but he hasn't changed a bit.

“Getting all the congratulations, it's a bit overwhelming I must say,” Perine said Monday. “I'm not used to this much attention but I don't think I'll ever get used to it. I'm still the same old Samaje Perine.”

Perine's 427-yard, five-touchdown performance against Kansas on Saturday has caused the spotlight on the freshman to simply explode. Perine said the number of people asking for pictures or autographs has increased drastically since the game. He puts up with it all, even if it's the one thing in life that irritates him.

“I get irritated easily over stuff like that and with all the extra attention, I have to keep it in because I know how excited they are about it,” Perine said. “I show my appreciation by taking pictures or signing something.”

Melvin Gordon held the record for most rushing yards in a game for a mere week before Perine ran past it on Saturday. After the game, it was Gordon who reached out to Perine to offer advice on how to handle the newfound attention.

“He just said to stay focused on what you have to do, in the classroom and just prepare for the next game like you always would,” Perine said of Gordon's advice. “Don't let all the extra attention change you. Just continue to be yourself and be the person you know you are.”

Former OU running backs Demarco Murray and Adrian Peterson tweeted congratulations to Perine on Twitter, moves that clearly resonated with Perine as he mentioned it on Monday.

Sunday afternoon at the OU men's basketball game, Perine was shown on the scoreboard during a break in the action. The crowd gave him a standing ovation, but Perine was clearly embarrassed by the wave of recognition.

“Very embarrassed,” Perine said. “I wouldn't say embarrassed, maybe more awkward. I've never had something like that happen to me before. It was kind of a (surprise) because I had no idea they were going to do it. I tried to handle it as best I could but I still felt very awkward.”

Perine may not like the attention, but as his legend grows, the crowds will grow as well. But if there's anyone built to handle it all, it's Perine.

-OU coach Bob Stoops thanked the fans for their support on Saturday during the game. It's the third time in five press conferences since Stoops responded, “So what?” to fans' criticism on social media following the Baylor game that Stoops has thanked the fans for something. Here's betting he saw the light and how wrong his comment was. That's about as much an apology we'll get there.

-Perine said the meal of choice for his offensive linemen on Sunday was Chicken Express. It's some good chicken, but the big fellas should have taken him up on his “whatever they want” stance from Saturday.

-While Stoops and Perine bemoaned the conditions on Saturday, defensive tackle Jordan Phillips said it was a lot of fun to play in the rain. He said the team was like a bunch of kids on the sidelines as the rain came down.

-Bedlam on Dec. 6 doesn't have a lot of implications for anything, besides OU playing for a probable bid to the Alamo Bowl and OSU fighting for any bowl. With other conference championship games on the schedule, it's possible Bedlam gets the 11 a.m. slot. It would be the Sooners' seventh 11 a.m. game this year and fourth in a row at home. Stoops made it clear he didn't want to play at 11 a.m. again and hoped the Big 12 would respect OU fans enough to not give them another early kick.

-As for injuries, Stoops wasn't sure how long Quentin Hayes' ankle injury would keep him out. He also said Blake Bell would be ready for Bedlam and that Sterling Shepard could be as well. He said Trevor Knight will not practice this week and will be constantly reevaluated over the next two weeks.