From Coast To Coast, Ferguson Touches A Nerve 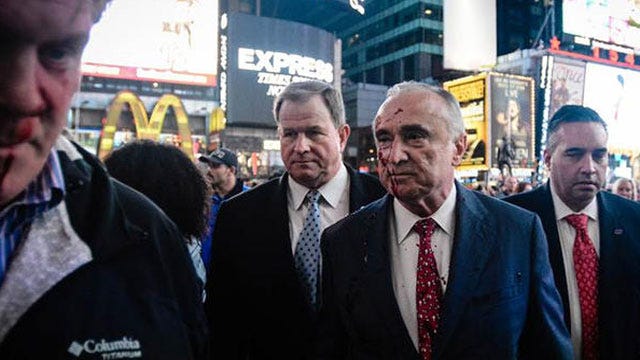 Thousands of people rallied late Monday and early Tuesday in cities across the country, from Los Angeles to New York and dozens of places in between, to passionately but mostly peacefully protest a grand jury's decision not to indict a white police officer who killed unarmed black 18-year-old Michael Brown in Ferguson, Missouri, this past summer.

They led marches, waved signs and shouted chants of "Hands up, don't shoot," the refrain that has become a rallying cry in protests over police killings across the country.

Some of the most disruptive demonstrations were in St. Louis, New York, and in Oakland, California, where protesters flooded the lanes of freeways and milled about stopped cars with their hands raised in the air.

Activists had been planning to protest even before the nighttime announcement that Officer Darren Wilson will not be charged in the shooting death of Brown. Many activists have promised more waves of protests nationwide Tuesday.

Brown's parents, community leaders, President Obama, and many others have called on the protesters to remain calm and to express their displeasure peacefully.

The racially charged case in Ferguson has inflamed tensions and reignited debates over police-community relations even in cities hundreds of miles from the predominantly black St. Louis suburb. For many staging protests Monday, the shooting was personal, calling to mind other galvanizing encounters with local law enforcement.

In New York, the family of Eric Garner, a Staten Island man arrested for selling cigarettes who was killed by a police officer's chokehold earlier this year, joined the Rev. Al Sharpton at a speech in Harlem lamenting the grand jury's decision.

Later, several hundred people who had gathered in Manhattan's Union Square marched peacefully to Times Square, where Police Commissioner Bill Bratton was sprayed with fake blood. A suspect was taken into custody for the incident.

The group continued to Columbus Circle , and north through Manhattan's the Upper West Side on Broadway. The protesters broke through barricades in some areas, reports CBS New York.

Police said that protesters briefly shut down the Triborough and Brooklyn bridges.

Sharpton called the decision an "absolute blow," adding: "Even when you see a blow coming that you expected, it still hurts nonetheless."

He said there had been no confidence in the Missouri prosecutors from the start, and questioned why the prosecutor didn't say if the grand jury decision had been unanimous.

With the death of a man last week in a New York city housing project at the hands of a police officer, Sharpton said, "Let it be clear that we are dealing with the same attitudes of Ferguson right here in the city. Ferguson is not just in Missouri."

Police departments in several major cities were ready for large demonstrations with the potential for the kind of violence that marred nightly protests in Ferguson after Brown's killing. Demonstrators there vandalized police cars and buildings, hugged barricades and taunted officers with expletives Monday night and early Tuesday while police fired smoke canisters and tear gas. Gunshots were heard on the streets and fires raged.

As the night wore on, dozens of protesters in Oakland got around police and blocked traffic on Interstate 580. Officers in cars and on motorcycles were able to corral the protesters and cleared the highway in one area, but another group soon entered the traffic lanes a short distance away.

One person was arrested for vandalizing a police car and many other arrests were made on the freeway, reports CBS San Francisco station KPIX-TV.

A diverse crowd of several hundred protesters marched and chanted in St. Louis not far from the site of another police shooting, shutting down Interstate 44 for a time. A few cars got stuck in the midst of the protesters, who appeared to be leaving the vehicles alone. They chanted "Hands up, don't shoot" and "Black lives matter."

"There's clearly a license for violence against minorities, specifically blacks," said Mike Arnold, 38, a teacher. "It happens all the time. Something's got to be done about it. Hopefully this will be a turning point."

In Seattle, marching demonstrators stopped periodically to sit or lie down in city intersections, blocking traffic before moving on, as dozens of police officers watched. Five arrests were made, reports CBS Seattle affiliate KIRO-TV.

Officers said the crowd was throwing fireworks at them in one intersection.

There were also reports of cans of food being thrown at officers.

Seattle police said the demonstrators threw bottles, rocks and lit flares near officers in another intersection. Some vandalism was reported, and police said protestors continued to throw bottles at them there.

Groups ranging from a few dozen to a few hundred people also gathered in Chicago, Salt Lake City, and Washington, D.C., where people held up signs and chanted "justice for Michael Brown" outside the White House.

"Mike Brown is an emblem (of a movement). This country is at its boiling point," said Ethan Jury, a protester in Philadelphia, where hundreds marched downtown with a contingent of police nearby. "How many people need to die? How many black people need to die?"

In Los Angeles, which was rocked by riots in 1992 after the acquittal of police officers in the videotaped beating of Rodney King, police officers were told to remain on duty until released by their supervisors. About 100 people gathered in Leimert Park, and a group of religious leaders held a small news conference demanding changes in police policies.

A group of about 200 demonstrators marched toward downtown.

The marchers briefly shut down the northbound and southbound lanes of Interstate 110 in downtown Los Angeles late Monday night, according to City News Service. People stood and lay in the northbound lanes and the center divider. California Highway Patrol officers declared an unlawful assembly. That protest lasted about an hour, reports CBS Los Angeles.

Another splinter group of about 30 people marched all the way to Beverly Hills, where they lay down in an intersection.

Chris Manor, with Utah Against Police Brutality, helped organize an event in Salt Lake City that attracted about 35 people.

"There are things that have affected us locally, but at the same time, it's important to show solidarity with people in other cities who are facing the very same thing that we're facing," Manor said.

At Cleveland's Public Square, at least a dozen protesters' signs referenced police shootings that have shaken the community there, including Saturday's fatal shooting of 12-year-old Tamir Rice, who had a fake gun at a Cleveland playground when officers confronted him.

In Denver, where a civil jury last month found deputies used excessive force in the death of a homeless street preacher, clergy gathered at a church to discuss the decision, and dozens of people rallied in a downtown park with a moment of silence.