NCAA Volleyball: Final Four Can Have Big Impact For Oklahoma 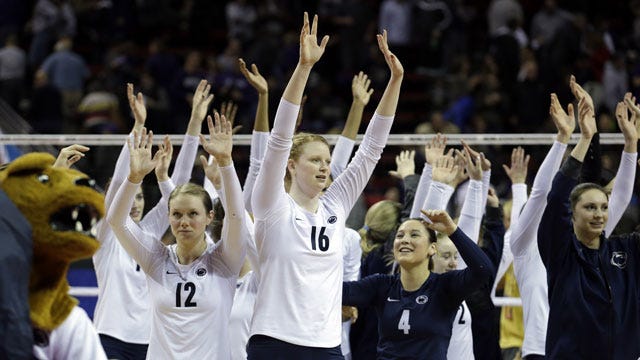 Debbie Hill has been coaching volleyball at Putnam City North for 15 years. Never in her wildest dreams did she expect the ultimate event in college volleyball to come to Oklahoma City.

Instead, the NCAA Volleyball Final Four has come to OKC, a city (and state for that matter) known much more for its passion for that other fall sport—not volleyball. Yet the action gets underway Thursday night as Penn State, Stanford, Texas and BYU square off at Chesapeake Energy Arena.

The best players in the country will be on display and the trip to Oklahoma City will be a homecoming for some, as Penn State's Micha Hancock (Edmond Memorial) and Stanford's Inky Ajanaku (Bishop Kelley) will be returning to their home state.

While it's surprising to the casual observer a premiere volleyball event would come to Oklahoma City, those within the sport are not surprised at all. The Final Four is another example of how the sport has grown tremendously in the state over the last decade.

In Oklahoma, the sport is certainly picking up steam. More girls are trying out for high school teams, club teams are growing and talent levels are increasing. Perhaps most importantly, game attendance is up at some schools — exposing more people to the sport.

Putnam City volleyball coach Sara Ligon played for the Pirates a decade ago and has seen firsthand how the sport has changed.

“We still had cuts here; we still had to make the team,” Ligon said. “It's not like what it is now. Last year we had 40 or 50 girls try out and about 35 this year. I think it happens from more people talking about it, more people coming to the games.”

Hill said the same has been true at PC North, but the biggest challenge has been overcoming the idea of volleyball being nothing more than a rec sport that anyone can play. When she first started coaching, Hill had to explain to girls what a volleyball even was. This year, Hill had the two highest-attended games in her time at North.

“I just think a lot more fans are coming out because they don't realize what a competitive, fast-moving sport it is,” Hill said. “They come out, and the first time they see it—for instance if I can get my students to come out—they come back game after game. You get them out there and they're like, ‘I thought this was like church-league volleyball,' and it's nothing like that.”

Volleyball is a momentum-driven sport where any number of things could happen at any point. More people are seeing that at a younger age and wanting to participate.

The growth isn't confined to high school, either. On the college level, the University of Oklahoma has made six consecutive NCAA trips and eight in the last 10 years after making just three tournaments before 2004. Tulsa has made the tournament four times, all since 2007.

But Oklahoma State doesn't play volleyball, which some see as a hindrance.

“I personally believe—and this is just me—if OSU had volleyball then it would be even bigger,” Edmond Memorial volleyball coach Natalie Murray said. “It's just kids that grow up supporting OSU, girls are wanting to play volleyball, and how can I go to OSU when volleyball is not an option. If they would get volleyball that would help.”

Since the high school season in Oklahoma is about nine weeks long, in order to become a great player, you have to play club volleyball.

“It's like there are two or three new clubs every year,” Murray said. “People are expanding, people are growing. Because of that, a lot of people are trying out for the (elite) clubs but not everyone can make them so players need somewhere to play. New clubs have been popping up and they have some really goo teams starting up too. So there are just a lot of options.”

Club and high school volleyball are not in conflict, though.

In fact, club volleyball is important for high schools to maintain a quality program. Since the volleyball season is so short, players could go nine months without touching a volleyball if it weren't for the club schedule.

Overall, coaches feel the club scene is a good thing for their teams.

“The teams that have 100 percent club participation, they're usually top five, top 10,” Ligon said. “This year, we're at about 75-percent club members playing school ball. That's helped us become more competitive and it's awesome because there are so many different clubs at different price points that allow girls to play.”

The college and high school seasons run at the same time, so college coaches can't spend their evenings in high school gyms while worrying about their own teams.

Since the club season runs from late November until July—if you make it to nationals — college coaches can spend more time evaluating and recruiting the best players.

“They (college coaches) need club and they go to the big national tournaments where they can see a lot of good girls in one place,” Hill said. “If they (high school players) really have aspirations of going on with it, they know they need to play.”

Hosting the NCAA Volleyball Final Four is an opportunity that doesn't come along every year, so Murray knows the importance of getting people to watch the games—at The Peake or on TV.

“We have to get as many kids to go out to these games as possible,” Murray said. “I'm talking young and old. Not just the teenagers who are playing varsity sports because obviously they are probably all going. We need to encourage the kids in our middle schools and our elementary schools to go and point out a girl from Edmond could be playing and wouldn't that be so cool to see her in person? Really with that exposure, it could convince a lot of them to choose volleyball.”

Murray, Hill and Ligon all said they've seen excitement building among their players and have encouraged them to go see what high-level volleyball looks like—hoping to inspire them to be better students of the game.

“To hear my girls understand the impact of how big that is for (the Final Four) to come here and the opportunity it is to experience that, that was really exciting for me because I never thought about that when I played,” Ligon said.

Having the event in Oklahoma City is helpful, but the presence of two Oklahomans will be an even bigger boost. Seeing a familiar name or face competing on college volleyball's biggest stage can make the sport more relatable for younger players.

“Even though they may not know her personally, they know the girl from Edmond Memorial went to Penn State,” Hill said. “It's like Sam Bradford going to the Rams. No one here had been a Rams fan before, but if you're from Putnam North, you're going to watch the Rams and Sam when they're on.

“In Oklahoma, we love to identify ourselves with things. I didn't grow up here, but coming here, that was one of the things that was different. We love to take pride in our own. When something like that happens, it's definitely exciting for the girls.”

How much the Final Four will truly impact the state's volleyball environment is anyone's guess, but the growth is undeniable.

And this weekend will only help accelerate that growth.