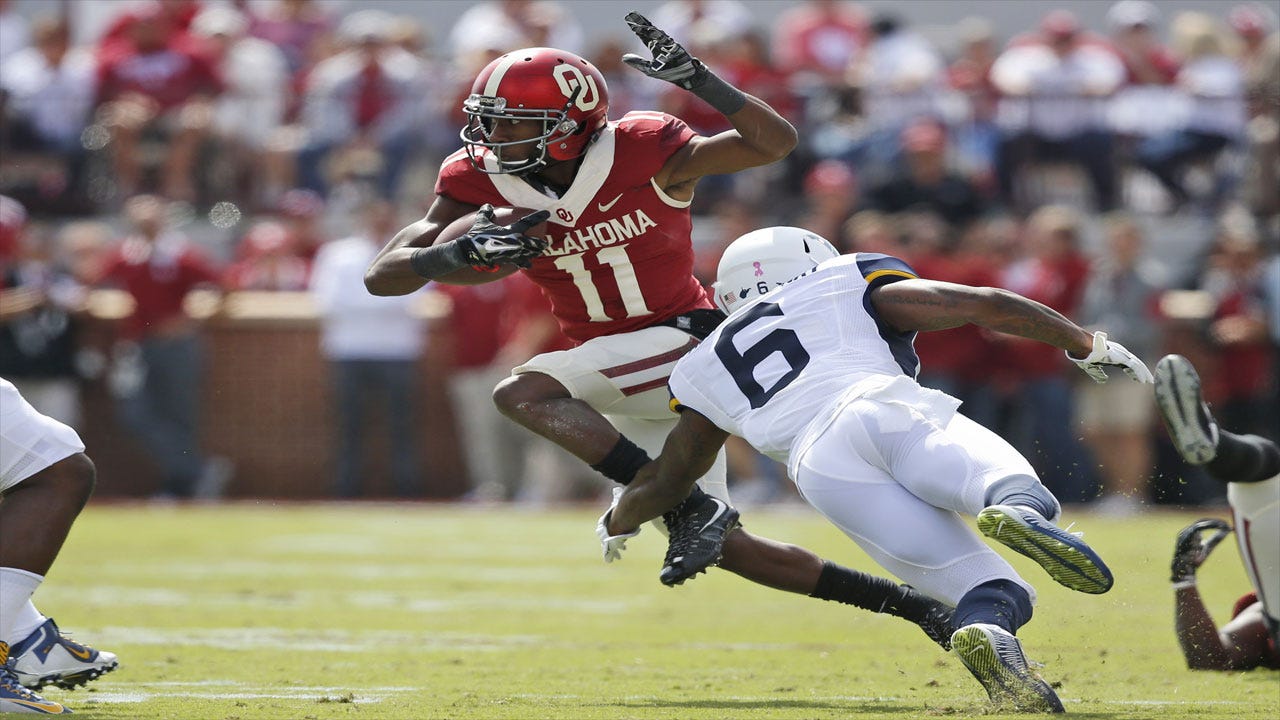 As the third quarter ticked down at Owen field on Saturday, fans in attendance to see the No. 15 Sooners take on No. 23 West Virginia were beginning to hold their breath. After building a 17-point halftime lead, it appeared that OU found itself in some type of predicament.

The Mountaineers were surging after intermission, and it seemed the Sooners had lost complete control of the game’s momentum when their lead shrunk to a mere three points with less than a minute remaining in the third quarter.

In the final seconds of the third quarter, Mayfield took the snap, pump-faked, and connected with receiver Durron Neal down the left sideline. Neal was wide open due to the crafty fake by his quarterback, and WVU cornerback Daryl Worley could only watch as Neal strolled into the end zone for a 71-yard score.

The explosive play put OU back up by double-digits, while also halting the momentum that WVU had built up throughout the third frame. The Sooners never looked back from that point, and went on to win 44-24.

With the win, Oklahoma improved to 4-0 overall and 1-0 in conference play behind 320 passing yards and three touchdowns from Mayfield.

Through the first three games of its season, West Virginia was one of the best defenses in the nation— surrendering an average of only 7.7 points per game while not allowing an opponent to score in the first half. That narrative changed on Saturday, as OU scored 24 points in the first two quarters by utilizing multiple offensive weapons.

Unlike early in the season when OU struggled to get going early, the Sooners got on the scoreboard on its second drive of the game. Mayfield hit Michiah Quick for a 34-yard pass for his first reception of the season, and then went right back to the sophomore on the next play for 23 more yards. The drive was capped off by a Mayfield 17-yard touchdown pass over the middle to tight end Mark Andrews to put OU up 7-0.

After West Virginia tied it up on the first play of the second quarter with a Rushel Shell touchdown, the Sooners were ready with a response.

Mayfield completed a 42-yard pass to Dede Westbrook on the first play of the drive to get the ball into West Virginia territory. A couple of plays later, Mayfield stood strong in the pocket, and threw a perfect 28-yard touchdown pass to Sterling Shepard on the right side to put OU back up by a touchdown.

Two OU possessions later, the Sooners wanted more paydirt. After a 16-yard pass to Neal and an 11-yard strike to Westbrook on consecutive plays, OU had the ball at the West Virginia 35-yard line. That’s when we saw Joe Mixon for the first time. Mixon rumbled 35 yards to the end zone on his third carry of the game to extend OU’s lead to 24-7.

West Virginia was then in attack-mode for most of the third quarter before Neal’s 71-yard pass from Mayfield seemed to wake up the entire OU team.

OU led 34-24 at that point, and the defense decided to clamp down on the Mountaineers.

With about 11 minutes left on the game clock, West Virginia had the ball at midfield and Mountaineers’ quarterback, Skyler Howard, dropped back to pass. OU captain Eric Striker came on a blitz off the edge and pummeled Howard from behind, forcing him to fumble. Linebacker Jordan Evans was right there for the scoop and ran with the ball 40 yards into the end zone. That marked the final touchdown of the game for OU, and the defensive score put the game out of reach.

Despite a rough third quarter performance, the OU defense was very impressive against a Mountaineers’ offense that knows how to score points. Quarterback Skyler Howard entered the game with the fourth best quarterback rating in the nation, but OU forced him to commit a whopping five turnovers.

Two of those turnovers came from cornerback Jordan Thomas—who missed the Sooners’ last game against Tulsa due to a suspension. OU struggled against the Golden Hurricane without Thomas, and his presence against WVU was crucial. Thomas was in the zone throughout the game, and finished with two impressive interceptions to go with his three tackles.

The defensive front was another bright spot in the Sooners’ win. Charles Tapper caused havoc all day and totaled eight tackles, while both Striker and Matt Dimon forced fumbles that were recovered by OU. Striker was everywhere throughout the entire game and finished with a team-high 13 tackles, with Dimon adding seven stops of his own.

Evans had nine tackles to go with his scoop and score, while Zack Sanchez, Ahmad Thomas and Dominique Alexander each had big games with eight tackles apiece. Along with his plethora of tackles, Ahmad Thomas also had a fourth quarter interception.  The OU defense finished with eleven tackles for loss in the win.

Semaje Perine didn’t score a touchdown, but the sophomore running back led the Sooners in rushing with 65 yards while Mixon added 43 yards on six carries. Westbrook led the Sooners’ receivers with five catches for 107 yards but it was Andrews, Shepard and Neal who found the end zone.

True freshman kicker and punter, Austin Seibert, was impressive yet again. Seibert hit all three of his field goals (40, 25, 40) while averaging 43.4 yards per punt.

With the loss, WVU now falls to 0-4 against the Sooners since joining the Big 12.

OU will be back in action on Saturday in Dallas when they take on Texas (1-4) at the Cotton Bowl.

News 9 Congress is taking it right down to the wire, as far as avoiding another government shutdown. Oklahoma's Own Alex Cameron has more from our Washington D.C. bureau.

Jonathan Cooper As we get closer to flu season, doctors said they're getting a lot of questions about differences between the flu and COVID-19.
View More Stories