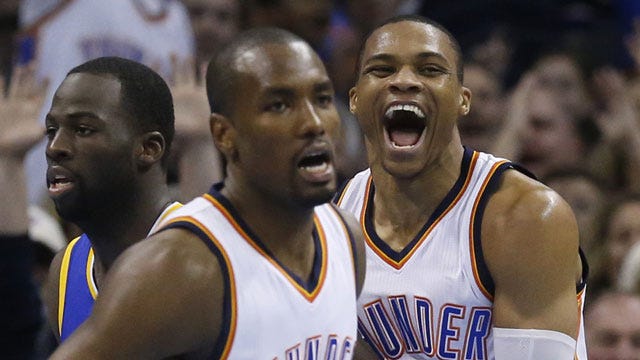 Only eleven days until the start of the NBA season, and there are plenty of interesting storylines heading into the most important year in Thunder history. Here are a couple of topics to keep an eye on as the season continues to inch closer.

What will Sam Presti do with Dion Waiters?

Waiters has seen a bit of a career revival ever since he was acquired from the Cavaliers in the middle of last season—averaging 12.7 points in the 47 games as a member of the Thunder. Waiters hadn’t lived up to the hype that surrounded him as the fourth pick in the 2012 draft, and Presti was smart to take a flyer on him to see if he could turn it around under the Thunder’s guidance.

Waiters enters this season on the last year of his rookie deal, and if the Thunder fail to extend his contract before the No. 2 deadline, then he’d become a restricted free agent at the end of the season. According to Yahoo Sports, Presti and Waiters have been busy negotiating a possible extension, but it’ll be interesting to see if the two sides get anything finalized.

Last season we all saw Enes Kanter play his way into a 70 million dollar contract, so Presti may be thinking that it would be smart to lock down Waiters before he shows he’s capable of playing to his lotto-pick potential.

One could argue that Waiters isn’t a good fit for the Thunder, and that his high volume shooting will do more harm than good. But Waiters can create his own shot, and that’s something the Thunder’s second unit has struggled with in the past. When Kevin Durant and Russell Westbrook had to take a breather, the scoring dropped for obvious reasons, and an improved Waiters could emerge as the solution to that problem.

Waiters will get plenty of opportunities this season, and Presti might be doing the smart thing by attempting to lock him down before he blossoms. Waiters has expressed in the past that he loves playing in Oklahoma City, but if the two sides fail to agree on an extension before the deadline, Presti may be forced to trade him to make sure the Thunder at least get something in return.

Who will be the Alpha male?

Both Kevin Durant and Russell Westbrook are two of the best players in the entire NBA, and the duo has been teammates in Oklahoma City since 2008. It’s no secret the two players are very close, but the start of this season brings about questions on who will emerge as the alpha male of the group.

Durant was widely considered the No. 2 player in the world after winning the MVP in 2014, but Durant was limited to only 27 games last season, and there are questions of whether he’ll return to that MVP form. While Durant was out, Westbrook was busy having his career year—averaging 28.1 points, 8.6 assists and 7.3 rebounds while recording a league high 11 triple-doubles.

The Thunder point guard was let loose without Durant at his side, and Westbrook was able to bring out his inner Tasmanian devil. His attack was relentless on a nightly basis and was allowed to do whatever he desired. Watching Russ be Russ was great, but people wondered if he’d be able to pull back the reigns once his Thunder Buddy was back.

I personally believe that neither Durant nor Westbrook has a personal agenda, and both of them have expressed that winning is the most important goal. If both of them stay healthy, there will be plenty of winning going on, and it won’t really matter who the leading scorer was, or who’s getting the post-game praise.

Both Durant and Westbrook are consummate professionals, and they’ll figure out a way to get back in the flow they were in before Durant got hurt. If the Thunder finishes atop the Western Conference, don’t be surprised to see Durant and Westbrook both earn first-team NBA honors. That’s a feat the duo has yet to accomplish together.