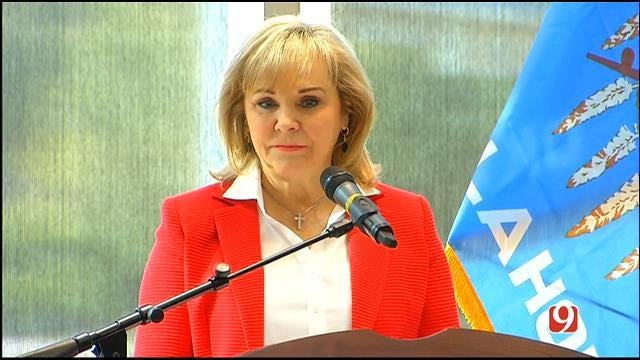 Oklahoma Governor Mary Fallin and the Department of Human Services (DHS) on Thursday kicked off the Oklahoma Fosters initiative to recruit more foster and adoptive families for children who are in state custody.

Oklahoma Fosters is a statewide campaign uniting state, tribal and local governments, businesses, nonprofits and the faith-based community to end the foster care crisis in Oklahoma, according to the governor's office.

“There are nearly 11,000 children in Oklahoma’s foster care system and we desperately need the help of our entire community to care for them,” said Fallin. “These children are in state custody through no fault of their own. They need foster families to love and support them during their time of need.”

You can also help by passing out fliers at work or at your place of worship, talking to your friends and neighbors or posting about Oklahoma Fosters on social media.

According to the governor's office, the first goal of the initiative is to help DHS recruit more than 1,000 new, safe, loving foster families statewide by the end of June 2016. The hope is that the Oklahoma Fosters campaign is the birth of a statewide movement around the foster care crisis.

Oklahoma Fosters is a renewed effort to recruit foster or adoptive families to support the state’s Pinnacle Plan, an effort launched in 2012 by DHS to reform the state's child welfare operations. While successful on several fronts, the recruitment of foster and adoptive families continues to be a challenge. The rate of abuse and neglect of children in the state continues to keep the number of children in state custody high, hampering efforts of the Pinnacle Plan.

“We need a full-court press in this state, that’s what Oklahoma Fosters is about,” Fallin said.

DHS Director Ed Lake said his agency is doing everything it can to engage community partners and the faith community in its efforts to recruit foster and adoptive families.

“This is a crisis that government alone cannot solve,” said Lake. “We must have the help of businesses, nonprofits and philanthropic foundations, along with our current community and faith partners.  There is a role for everyone and it will take all of us working together to take care of Oklahoma’s children.”

Oklahomans can get involved by going to the Oklahoma Fosters website and clicking on “Foster Care & Adoption” for information on being a foster or adoptive parent. They also can call the foster parent hotline, 1-800-376-9729.

“We are too good of a people to allow children to grow up in an environment without parental love,” said Fallin. “If we do, we all suffer, because the children that are neglected today could become adults that fill our prisons and continue a cycle of abuse and neglect.”