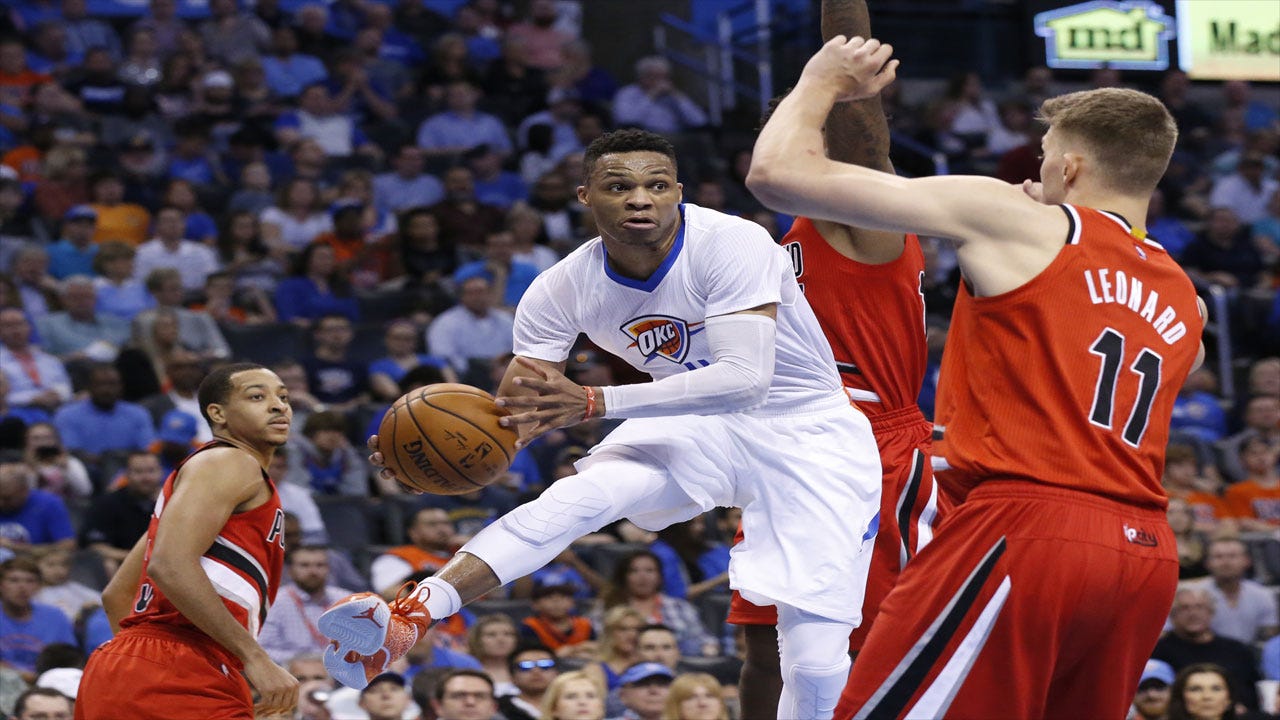 After stumbling out of the all-star break to the tune of a 4-8 record over the last month, the Thunder may have wiped away much of the worry that surrounds the team after pulverizing the Blazers 128-94 on Monday night in Oklahoma City.

“Tonight I thought we really played well. I think that’s two games in a row, three games here, defensively where I think we continue to get better,” Thunder head coach Billy Donovan said. “I thought offensively we shot the ball better than we had the last two games. I thought we were really unselfish with the ball tonight. A big key was our turnovers were down. Certainly that’s been a problem the last couple of games.”

No doubt a feel good win for the team and even more so for the Thunder faithful. #News9Thunder

Russell Westbrook recorded his league-leading 12th triple-double of the season with 17 points, 16 assists and 10 rebounds in only 28 minutes of action. Westbrook reached the statistical milestone just three minutes into the third quarter, but the dynamic point guard whiffed on a chance to record the quickest in triple-double in league history after letting his tenth and final rebound slip out of his hands in the second quarter.

Westbrook has 12 triple-doubles this year which is the most by a player in one season since Jason Kidd in '07-08 (13).

“Yeah I’ve seen that before, from Russell Westbrook,” Kevin Durant said when asked about Westbrook’s first half performance. “But I think he’s more concerned with how we played, we played a great first half. Triple-doubles look great on the stat sheet everybody loves them, but as our point guard I’m sure he was more concerned with how we were playing.”

As well as OKC played in the win, it took some time for the home team to coil the springs before launching. Led by Al Farouq Aminu’s 10 points in the game’s first seven minutes, Portland built up a six-point lead and was scoring in bunches.

Facing an early deficit, Donovan elected to sub Enes Kanter into the game with 4:28 left in the first quarter and that proved to be a tremendous decision by the first-year head coach. Kanter provided instant energy off the OKC bench by expanding the floor, and all of the sudden the Thunder was rolling inside of Chesapeake Energy Arena.

“We got a great boost from Enes off the bench. He played terrific. His post and rebounding in the first half was tremendous,” Donovan said.

Kevin Durant scored eight points in the final two minutes of the first frame as OKC closed out the quarter on a 15-to-0 run. Not only was Durant torching the Blazers, but he was doing it with attitude. Whether it was with his grimacing snarl or his confident back and forth chatter with Portland players, it was evident Durant wasn't going to let his team drop three straight games after losses to the Timberwolves and Spurs last week.

“We just wanted to win. At the end of the day this team beat us the last couple minutes of the game up there in Portland and we know we may face these guys in the playoffs so we wanted to send a message and we wanted to play well,” Durant said.

Watching this tonight has to make you feel a little better about a potential matchup with Portland in Round One. #News9Thunder

As punishing as OKC’s run was to end the quarter, the second quarter thrashing by the Thunder was just as relentless.

Randy Foye got things kick-started in the second with a 3-pointer to give OKC a 12-point lead, and then things began to get out of hand for Portland. The Thunder was clicking on all cylinders as the second unit did its job getting things going, and the pure athleticism of Durant and Westbrook did the rest.

Westbrook was busy orchestrating an efficient offense, while the rest of his ensemble were busy perfectly playing the roles around him. Durant lit the Blazers up for 17 first half points, while Kanter scored 12 points in the second quarter alone. Anthony Morrow’s second 3-pointer of the quarter with 4:31 left until halftime capped off a 40-to-8 Thunder run.

The Thunder took a 24-point lead into halftime and got up as many as 31 points in the third quarter as OKC cruised to a pristine bounce back win.

Sure a treat to watch #Thunder play so well. Playing downhill & strong D. Funny how that seems to help! @News9. @okcthunder

One key to the Thunder win was the lack of overall turnovers by its playmakers, as OKC only accumulated six throughout the first three quarters before Durant and Westbrook were able to rest throughout the fourth.

“Those two guys have got the ball in their hands a lot. Those two guys really care and they work hard,” Donovan said. “I think certainly with some of the turnovers we’ve had, those guys take that personal. They take responsibility and they want to do a better job of taking care of the basketball and I think they were more mindful of that and both guys did a really good job.”

Kanter led the thunder in scoring with 26 points and seven rebounds while Durant scored 20 points and dished seven assists. In all, six Thunder players scored in double digits with Foye and Morrow each totaling 11 points off the bench.

Kevin Durant now has 20+ points in 52 straight games. That is the second longest streak of his career (56 games).

Damian Lillard led the Blazers in scoring with 21 points and C.J. McCollum added 15.