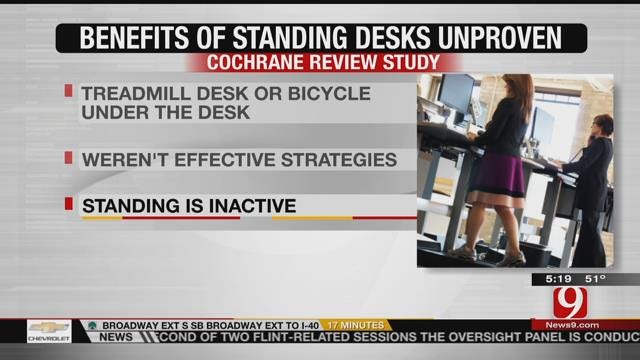 If you're sitting all day, doctors say you could be well on your way to diabetes, heart disease, and obesity.

As a way to combat the risk, standing desks are now showing up in the workplace. However, we found a new study that suggests they might not help.

Desks that let you stand up to work may be trendy, but so far the health benefits are largely unproven. Researchers say they have yet to find high-quality evidence to support the popular desks.

Six studies were done and from those, workers who stood logged from 30 minutes to two hours less sitting time each day. However, the small sample size means researchers can't recommend standing desks.

The review also looked at other strategies aimed to reduce sitting time at work, from treadmill desks to a bicycle under the desk. Researchers found those didn't make much of a dent either.

This is what they concluded. Although more active than sitting, "standing is still inactive, and probably won't counterbalance the effects of sitting very much."

Researchers say there is a definite need to find out how to reduce sitting at work.

Until more is known, the best advice is to try to be active and get regular exercise.