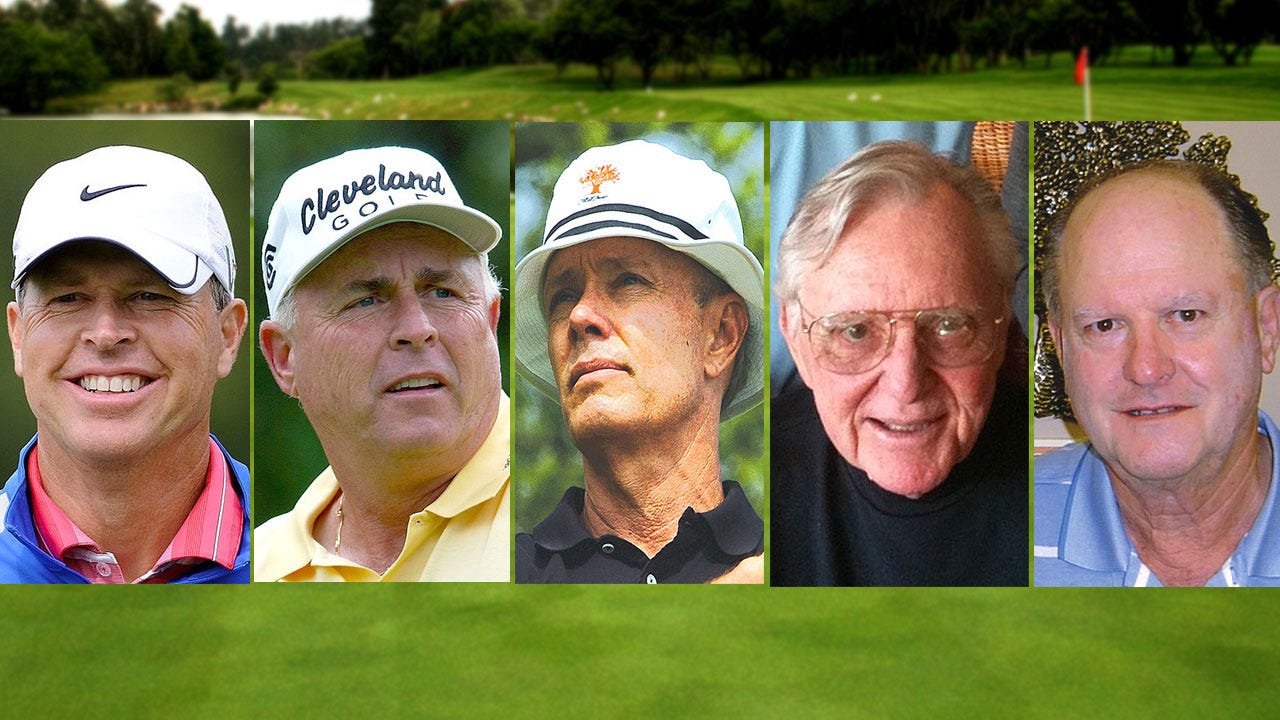 The Oklahoma Golf Hall of Fame will add five new inductees in October. And what a five-some it is – a group of successful golfers who have much more in common than having made their disproportionate number of birdies.

Each left his mark on Oklahoma State and what’s now Oak Tree National. But thankfully, Bob Tway, Doug Tewell and Mark Hayes are just as outstanding in being true gentlemen as they were on the links. Same goes for the duo of posthumous inductees, Ernie Vossler and Joe Walser.

The induction ceremony will be October 1 at Oklahoma City Golf & Country Club and the Hall of Fame Classic fund-raising golf tournament will be held there October 2nd. Tickets go on sale in June with updated information available at www.oklahomagolfhof.org.

Likable lanky Bob Tway is the headliner of the group. Tway clinched the 1986 PGA Championship on the 72nd hole at Inverness, holing a greenside bunker shot that has gone down as one of the greatest and most memorable shots in major championship history. This shot beat World No. 1 Greg Norman and is clearly the highlight of Tway’s career.

Tway transitioned from a 5-foot-6, 135-pound high school sophomore option quarterback in Georgia into a 6-foot OSU freshman at Oklahoma State where he would become one of OSU’s and Coach Mike Holder’s greatest players. In 1981 the sweet-swinging 6-foot-4 Cowboy senior was named the Fred Haskins Award winner for collegiate player of the year. Oh by the way, Tway was a three-time first-team All American, the 1979 Big Eight medalist and helped lead OSU to national championships in 1978 and 1980, with a runner-up finish in 1979.

In Tway’s second season on the PGA Tour in 1986, he won four times, including that PGA, and had 13 Top-10 finishes. Tway finished a measly $516 dollars behind official money leader Greg Norman, but was named PGA of America’s Player of the Year. Bob competes regularly now on the Champions Tour and will no doubt continue cashing checks until he decides to hang it up and spend his time mentoring talented son Kevin, who hopes to continue and follow in Dad’s footsteps – all the way to halls-of-fame of his own.

Those who know Tway best say he’d have had more success had he had not continually pursued the perfect swing. In fact, Bob says, “Probably some of it is my fault for tinkering with my golf swing.” But always looking to improve is also what helped make Bob Tway the champion he was. A smart guy with an inquiring mind. Tway said, “I was always trying to get better. What can I say?”

Well, what Bob Tway can say is, “Thank you for honoring me as a member of the Oklahoma Golf Hall of Fame.” Well-deserved and an easy choice for the selection committee.

Doug Tewell is another OSU-slash-Oak Tree Gang-slash-PGA Tour-slash-Champions Tour inductee. He coincidentally grew up watching, playing with and against his co-inductee Mark Hayes. Stillwater was home and would continue to be that all the way through playing 1969-71 for legendary former OSU Golf Coach Labron Harris – a deserving 2016 Oklahoma Golf Hall of Fame inductee.

Tewell was one of the all-time straightest drivers of the golf ball. For twelve years (1983-95) he never finished out of the Top 20 in driving accuracy and led the tour in 2002-03.

Doug played professionally for 36 years. He won $2.7 million and had 60 Top-10 finishes on the PGA Tour and exploded onto the scene when he joined the Champions Tour. Doug won 8 times from 200-2004, with his first win as a senior being a major—the 2000 PGA Seniors’ Championship. He was voted the 2000 Rookie of the Year on the senior circuit.

Tewell won his second major in 2001, when he blistered the field with a 23-under score that was the lowest-scoring total in PGA history for a major championship. The Countrywide Tradition was part of career earnings where he made $10.5 million.  He was consistent too, never losing his playing privileges after joining the PGA Tour in 1975.

Like Tway – and the other inductees – Doug has always been a great family man and a popular figure on and off the golf course, with an easygoing manner.

Mark Hayes has enjoyed six decades of golf excellence and is clearly deserving of his hall of fame induction. People who watched Mark from an early age will tell you Hayes was one of the great junior golfers in Oklahoma history. By 1965, Hayes was state medalist playing at Northeast High School and later teamed with Tewell to win state titles at Stillwater (Donart) High School.

The young man, who took up the game at age 6 in College Station, TX, where his father was the freshman basketball coach at Texas A&M, would be another inductee who enjoyed an illustrious college career at Oklahoma State (1968-71). He was a two-time, first-team All-American his junior and senior seasons but served two years in the Army before becoming a professional. Before his Tour days, he finished second in the prestigious U.S. Amateur and played on the winning U.S. side in the World Cup.

Hayes turned pro in 1973, won three times on the PGA Tour in the 1970s and also finished second six times. He placed no worse than 68th on the money list for eight straight seasons (1974-81)

Hayes’ premier tour win was at the 1977 Tournament Players Championship. His fourth and final PGATour win at the 1986 Tallahassee Open.

I love this stat about the talented Hayes: From 1976-82, he had Top-15 finishes in all four majors. He shot a 63 at Turnberry in 1977, tying the record for lowest round in any major championship.

In the late 1980s, Hayes began his own golf course design company and completed multiple projects throughout Oklahoma and neighboring states.

Ernie Vossler (1928-2013 and Joe Walser (1932-2012) will go in posthumously and round out the fivesome in the 2017 Class of the Oklahoma Golf Hall of Fame. Stories on these tremendous golf figures are to follow.

I consider myself fortunate to serve on the board of directors of the Oklahoma Golf Hall of Fame. Being on the Selection Committee allows me to review all the outstanding resumes of a long list of potential inductees. And I can tell you everyone on that committee and at the Oklahoma Golf Hall of Fame is thrilled to honor such a distinguished group of outstanding golfers and true gentlemen to the hall.

News 9 Congress is taking it right down to the wire, as far as avoiding another government shutdown. Oklahoma's Own Alex Cameron has more from our Washington D.C. bureau.

Jonathan Cooper As we get closer to flu season, doctors said they're getting a lot of questions about differences between the flu and COVID-19.
View More Stories