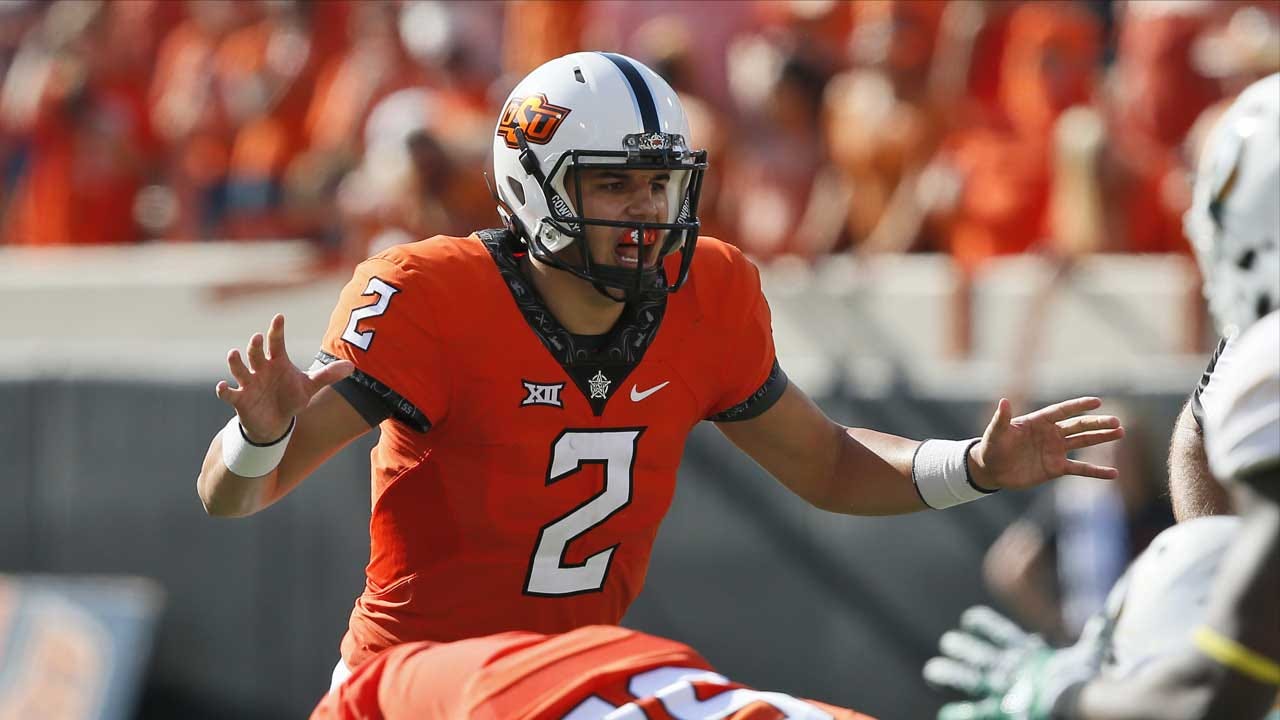 Chubb is the pre-eminent edge-rusher in the 2018 class who checks all the boxes. Size. Production. Pass-rushing moves. Edge-setting strength. Athleticism. He is good.

James was unsurprisingly all over the field in Florida State's easy victory over Louisiana-Monroe, a rescheduled game from early in the season. His wide-ranging skill set should -- and likely will -- make him one of the first defensive backs off the board in April, if not the first.

Nelson will step into the NFL and instantly improve a team's run game, regardless of who's carrying the football. As a pass-protector, the Notre Dame star uses his strong base and balance to win much more often than not. And he's incredibly aware of blitzers. He was dominant against the always-stout LSU defensive front. He's an offensive-line-changing guard prospect.

Smith was quiet in the first half of the Rose Bowl, then looked like the best player on the field as Georgia put the clamps down on the most explosive offense in college football in the final two quarters. He had two impact stops in overtime to force Oklahoma into field goal attempts, the second of which was blocked and helped the Bulldogs earn a trip to the national title game. His blend of power and speed are unparalleled in this draft class at the linebacker spot.

Brown had his work cut out for him against an assailing Georgia pass-rush that boasts the long and ferocious duo of Davin Bellamy and Lorenzo Carter. The Oklahoma tackle was his usual self paving lanes for the run game but was shockingly knocked off his block a few times with swipe moves. It wasn't an abysmal game, as he only moves down one spot from last week.

Fitzpatrick might not be the most refined cornerback to enter the NFL over the past five years, but he's among the most athletically gifted. He's as reliable as they come against the run too, which is an often-overlooked aspect of playing cornerback in the NFL. He made his presence felt in every area in an impressive outing against Clemson's multifaceted attack.

Barkley's 92-yard touchdown in the Fiesta Bowl was another example of his awe-inspiring speed at his size. He had issues against Washington's brick-wall of a defensive line beyond that, but it's those type of home runs that separate Barkley from other recent running back prospects. Even on a day when running lanes are hard to come by, he can score from anywhere on the field.

Hurst had a vintage game in Michigan's loss to South Carolina in the Outback Bowl. He lived in the backfield and caused problems for the Gamecocks' rushing and passing attacks. He's a low-center-of-gravity, one-gap penetrator with surprising strength.

Sutton is the premier touchdown-scoring boundary wideout in the 2018 class. At 6-feet-4 and 220-plus pounds, he's a matchup nightmare, and he's deceptively agile after the catch.

After sitting atop my quarterback rankings for the vast majority of the season, a brutal game at home against Kansas State sunk Rudolph to No. 2, just behind Lamar Jackson, as bowl season approached. Following a masterful 351-yard, two-touchdown, zero-interception performance against Virginia Tech, he regains the No. 1 quarterback spot.

According to Pro Football Focus, Guice forced seven missed tackles against Notre Dame in the Citrus Bowl. Clockwork for him. On the season, Guice had four games with at least five forced missed tackles. One can reasonably argue that Guice is more impressive than Barkley between the tackles, and he's probably more powerful through tackles. He just lacks elite long speed.

Jackson's final collegiate game was one to forget, and although the four-interception day dropped him to No. 2 in the quarterback rankings, it doesn't make his draft stock totally plummet, as he drops five spots from a week ago.

Playing much more off-ball linebacker than I expected against Georgia, Okoronkwo rushed Jake Fromm 21 times and only generated one hurry, per PFF. He knifed through the Bulldogs' underrated offensive line frequently against the run, and set the edge well as usual. If used primarily as an outside rusher, Okoronkwo has the athleticism and nuance when getting to the quarterback to be a productive NFL player right away.

Vea's immense strength was on display against Penn State, and he clubbed offensive linemen often to make impact stops against the run. He was held in check as a pass-rusher yet didn't appear to be sent toward Trace McSorley frequently. With some coaching on how to lower his pad level, Vea can be a Haloti Ngata-type interior lineman in the pros.

Miller is a large, physically gifted offensive tackle who was one of the bright spots on UCLA's line the past few season. He has matured into a quality pass-protector who wins with length and footwork, which NFL teams will love.

Washington ended his brilliant tenure at Oklahoma State with a loud statement. He reeled in five catches for 126 yards with one long touchdown. He set career highs in catches, receiving yards, yards per catch and touchdowns this season. He's a well-built speedster with strong hands.

With the top quarterbacks done with their bowl games, it appears Rosen sitting out UCLA's bowl game was a blessing in disguise. Outside of Rudolph, all the most highly touted signal-caller prospects had average-to-horrendous outings on the national stage. Rosen looks the part of an NFL quarterback yet strangely has stretches when he appears out of sorts and can make bad decisions.

Jackson is a stifling man-to-man cornerback with plus ball skills. That's it. He should be a Round 1 lock. Unsurprisingly, Jackson locked down the Boston College passing attack en route to a win for Iowa in the Liberty Bowl.

Love looked to be somewhat close to 100 percent in Stanford's bowl game, as he looked almost as springy and light-footed as we saw him earlier in the season. Every time I watch him I think "Chris Johnson."

Okorafor is an offensive line coach's dream. He's enormous, with long arms, quick feet and he consistently played with a balanced foundation.

Bryan isn't as twitchy as J.J. Watt but at 6-4 and 290 pounds with an array of pass-rushing moves, the comparison is actually quite logical. Bryan has already declared that he'll be entering the 2018 draft.

After a strong end to the regular season, Darnold reverted to the type of play that had many -- including myself -- thinking, in a vacuum, the ideal decision for him would be to stay at Southern California for one more season. Darnold dropped an assortment of unreal dimes against Oho State yet was overwhelmed by the Buckeyes' pass-rush and made plenty of errors. His elongated delivery led to a turnover as well.

Ward was named first-team All-American and rightfully so. He finished the year with 15 pass breakups, two interceptions and repeated blanket coverage. If he was a few inches taller, he would be a top-10 pick.

Williams might have the highest ceiling of any offensive tackle in the class, but a few hiccups in his injury-shortened 2017 put him at No. 25 for the time being. The pre-draft process will be vital for him.

The small-school sleeper with top edge-rusher capabilities, Davenport has gradually gotten better in each of his seasons at Texas-San Antonio, and that maturation culminated with a 8.5-sack, 17.5-tackle-for-loss senior season for the 6-7, 255-pounder.

Jones was mostly bottled up against Ohio State, yet flashed his suddenness between the tackles on a few occasions. That outing doesn't change an otherwise spectacular campaign for the junior with a bright NFL future due to his vision and explosiveness.

Key has Myles Garrett-ian size, athleticism and pass-rushing skills. It's just that he rarely puts everything together. Injuries played a role in 2017 after he was a monster in 2016 for the Tigers.

Oliver has No. 1 cornerback physical traits, especially his ability to run and change direction. After breaking up 13 passes in his first two seasons with the Buffaloes, he knocked away 12 passes this season.

Ateman did his thing against the Hokies. He showed off his rebounding ability on a deep ball and was a safety valve for Rudolph as he scanned through his progressions. Ateman obviously doesn't win with separation. His body and length provide him the requisite separation as the ball arrives.

Andrews didn't get loose against Georgia, as he only caught four of seven targets for 52 yards. Still, at his size with his movement skills in the open field, Andrews is the prototypical, modern-day tight end in the NFL.

In a losing effort in the Sugar Bowl, Daniel made an impact in all three phases of playing defense, as he pressured Jalen Hurts, made a few stops near the line of scrimmage on run plays and covered relatively well. Not a flashy player, O'Daniel is ultra-reliable and at 6-1 and 220 pounds, he runs as well as any outside linebacker in the country. Some defensive coordinator is going to love given O'Daniel a variety of roles in he NFL.

Ragnow hasn't played since mid-October but his film this season and in 2016 was outstanding at the center position. At 6-foot-5 and around 320 pounds, he's a taller pivot who plays with good pad level and is seemingly always under control regardless of his duties.

News On 6 McDonald's is celebrating the 25th anniversary of the McFlurry by releasing a limited edition McFlurry suit.
View More Stories