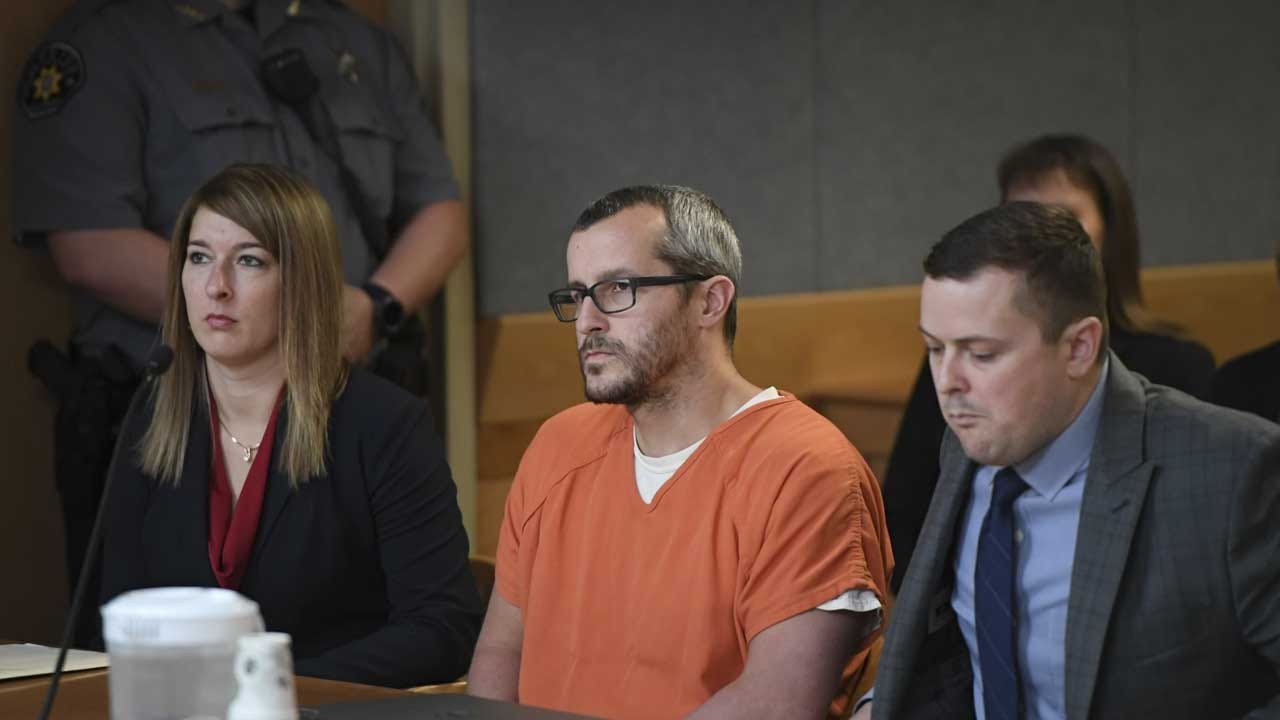 A Colorado man was sentenced to life without parole Monday after pleading guilty to murdering his pregnant wife and their two young daughters in August and dumping their bodies on an oil work site. Christopher Watts pleaded guilty on Nov. 6 to three charges of murder in the deaths of his wife, Shanann Watts, and their young daughters Bella and Celeste.

He also pleaded guilty to two counts of murdering a child, one count of unlawful termination of a pregnancy in the death of the child's unborn son and three counts of tampering with a deceased human body.

Calling the crime the most "inhumane and vicious" he had seen in his career, a judge sentenced Watts to consecutive terms of life without parole for each of the killings and to another consecutive sentence of 48 years in the killing of the unborn child, whom the couple called Nico. Watts received additional 12-year sentences on evidence tampering counts.

Prosecutors have said they agreed not to seek the death penalty in exchange for Watts' guilty plea, after seeking approval from Shanann Watts' family. First-degree murder charges in Colorado require a minimum sentence of life without a chance at parole for adults.

"How dare you take the lives of my daughter, Bella, Celeste and Nico," Frank Rzucek said. "I trusted you to take care of them, not kill them."

Shanann Watts' mother Sandy Rzucek told Christopher Watts her daughter loved him "with all of her heart" and that her granddaughters "adored you and also trusted you." She referenced a video of Bella, shared widely on social media after the killings, showing the child singing a song about how her father is her hero.

"I have no idea who gave you the right to take their lives," Sandy Rzucek said. "But I know God and his mighty angels were there at that moment to bring them home to paradise."

Rzucek said she asked the district attorney not to pursue the death penalty "because that's not my right. Your life is between you and God. Now and I pray that he has mercy for you."

Christopher Watts, who appeared emotional during the testimony, elected not to speak. He is represented by the Office of the Colorado State Public Defender. A lawyer for Watts gave a brief statement on his behalf: "Although he understands words are hollow at this point, he is truly sorry for all of this."

Judge Marcelo Kopcow ruled Thursday that Christopher Watts' parents are considered victims of the crime because they are the girls' grandparents. Victims are allowed to give a statement or provide written comments during sentencing hearings in Colorado. Christopher Watts' mother cried as she spoke, saying that she is "united in grief" with Shanann Watts' family over the killings. She turned to Christopher Watts and told him that she loved him, sobbing.

Through a lawyer, Christopher Watts' family encouraged him to make a full confession. Weld County District Attorney Michael Rourke said it's likely he will never give a truthful account of what happened and why he carried out the killings.

Rourke said Watts strangled his wife to death with his hands in an "uncontrolled, vengeful manner" after an argument.

"The horror that she felt as the man she loved wrapped his hands around her throat and choked the life out of her must have been unimaginable," Rourke said.

He then smothered the girls, 3 and 4, Rourke said. Defensive wounds on Bella Watts' body showed that the child fought for her life, Rourke said.

Afterwards, Watts transported the bodies in a truck to the oil work site, on property owned by the company Christopher Watts worked for until his arrest. He disposed of the remains separately, Rourke said: "He ensured they would not be together — even in death."

The girls' bodies were found submerged in two different oil tanks, and Shanann Watts' body was found buried nearby in a shallow grave.

A friend asked police to check on Shanann Watts on Aug. 13 when she could not reach her and grew concerned that the 34-year-old who was pregnant with a third child missed a doctor's appointment. Local police initially handled the search and soon sought support from Colorado investigators and the Federal Bureau of Investigation.

Meanwhile, Christopher Watts spoke to local television reporters from the front porch of the family's home in Frederick; a small town on the plains north of Denver where drilling rigs and oil wells surround booming subdivisions. Watts pleaded for his family to return home, telling reporters their house felt empty without four-year-old Bella and three-year-old Celeste watching cartoons or running to greet him at the door.

Within days, the 33-year-old was arrested and charged with killing his family.

According to court records, Watts admitted to police that he killed his wife. Watts told investigators that he strangled her in "a rage" when he discovered she had strangled their two daughters after he sought a separation.

Prosecutors have since called Watts' account "a flat-out lie."

Police also learned that Christopher Watts was having an affair with a coworker. Watts had denied that before being arrested.

Watts' girlfriend said last week he had misled her from day one, telling her his divorce was almost final. "He's a liar," Nichol Kessinger told the Denver Post. "He lied about everything."

After the killings, Rourke said, Christopher Watts texted frequently with the girlfriend, called a realtor and also took steps to cover his tracks by telling staff at the girls' school that they would no longer be enrolled there.

The killings captured the attention of media across the country and became the focus of true crime blogs and online video channels, aided by dozens of family photos and videos that Shanann Watts shared on social media showing the smiling couple spending time with their children and each other.

Courts records, though, showed the couple's lifestyle caused financial strain at times. They filed for bankruptcy in June 2015, six months after Christopher Watts was hired as an operator for the large oil and gas driller Anadarko Petroleum at an annual salary of about $61,500. At the time, Shanann Watts was working in a children's hospital call center for $18 per hour.

They reported total earnings of $90,000 in 2014 but $70,000 in unsecured claims along with a mortgage of nearly $3,000. The claims included thousands of dollars in credit card debt, some student loans and medical bills.