Trump Campaign Takes Steps To Prevent A Challenge Within GOP 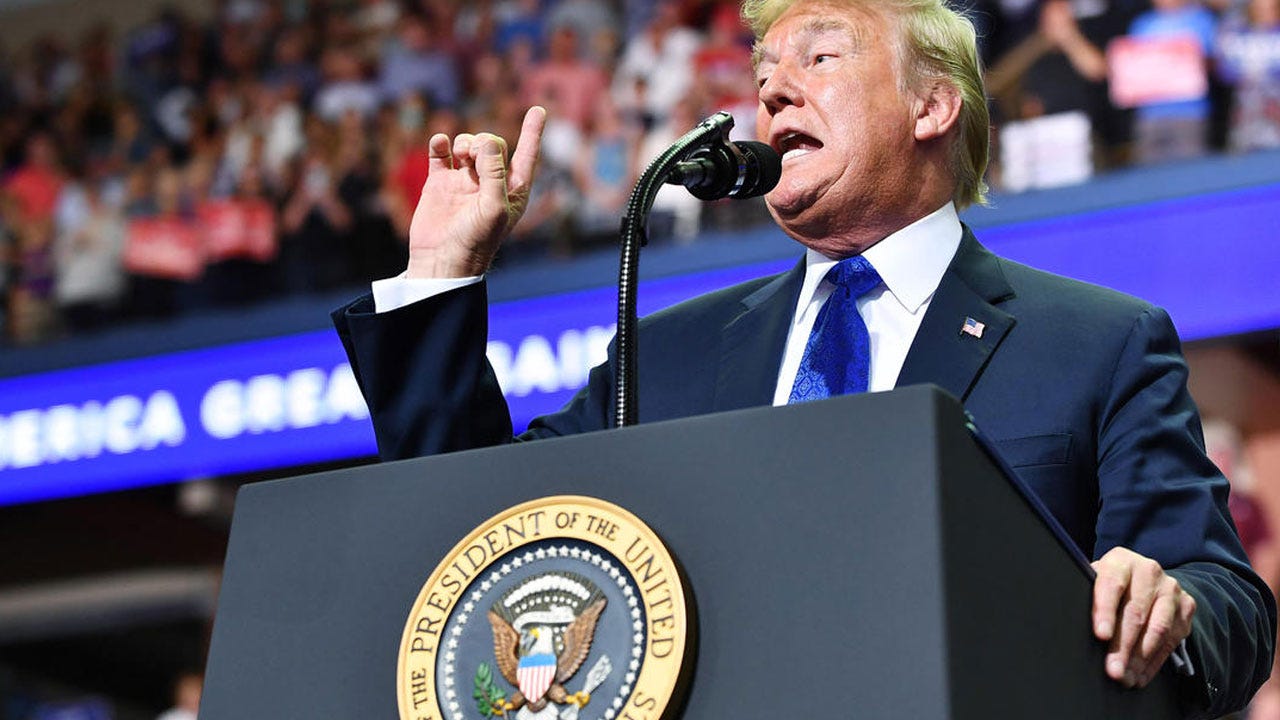 Worried about a potential Republican primary challenge, President Donald Trump’s campaign has launched a state-by-state effort to prevent an intraparty fight that could spill over into the general-election campaign.

The nascent initiative has been an intense focus in recent weeks and includes taking steps to change state party rules, crowd out potential rivals and quell any early signs of opposition that could embarrass the president.

It is an acknowledgment that Trump, who effectively hijacked the Republican Party in 2016, hasn’t completely cemented his grip on the GOP and, in any event, is not likely to coast to the 2020 GOP nomination without some form of opposition. While any primary challenge would almost certainly be unsuccessful, Trump aides are looking to prevent a repeat of the convention discord that highlighted the electoral weaknesses of Presidents George H.W. Bush and Jimmy Carter in their failed re-election campaigns.

To defend against that prospect, Trump’s campaign has deployed what it calls an unprecedented effort to monitor and influence local party operations. It has used endorsements, lobbying and rule changes to increase the likelihood that only loyal Trump activists make it to the Republican nominating convention in August 2020.

Bill Stepien, a senior adviser to the Trump campaign, calls it all a “process of ensuring that the national convention is a television commercial for the president for an audience of 300 million and not an internal fight.”

One early success for Trump’s campaign was in Massachusetts, where Trump backer and former state Rep. Jim Lyons last month defeated the candidate backed by Massachusetts Republican Gov. Charlie Baker, a Trump critic, to serve as the state party chairman.

“We have a constant focus on tracking everything regarding this process,” Stepien said. “Who’s running, what their level of support for the president is and what their vote counts are.”

The campaign’s work extends beyond state party leadership races, which are taking place in many key states in the coming weeks. Trump’s team plans to organize at county and state caucuses and conventions over the next 18 months to elevate pro-Trump leaders and potential delegates. Ahead of the convention, it aims to have complete control of the convention agenda, rules and platform — and to identify any potential trouble-makers well in advance.

That sort of organization is a leap from Trump’s 2016 delegate operation, which faced challenges by anti-Trump activists in the party. Trump aides say it’s the most aggressive effort ever launched to protect an incumbent.

Nick Trainer, a White House veteran named last month as the campaign’s director of delegates and party organization, is leading a team of three to coordinate with state and local parties in the run-up to the convention.

Yet the efforts to protect Trump simply highlight his vulnerability, said an adviser to one potential Republican opponent.

“They’re not talented, but they’re not idiotic. They rightfully understand that he could be badly damaged or lose in a nomination battle. They’re doing too much. It looks weak,” said John Weaver, a senior adviser to former Ohio Gov. John Kasich, one of the few high-profile Republicans seriously contemplating a primary challenge.

Trump’s campaign is closely monitoring the intentions of Kasich and other potential primary challengers, and aides said they expect someone to mount a campaign for the nomination. But they insist their efforts are not borne out of fear that Trump is vulnerable.

Primary challenges against incumbent presidents have never been successful in the modern era. And Trump’s poll numbers among Republican voters have proven to be resilient. Still, his aides said they are taking lessons from one-term leaders who lost their re-elections after embarrassing nominating fights.

Those in the past who challenged a president both distracted the incumbent from the November campaign and offered a voice to intraparty discontent, seeding weaknesses that were exploited by a general-election rival.

Pat Buchanan’s campaign against Bush in 1992 focused in part on highlighting Bush’s broken pledge not to raise taxes, a vulnerability that dogged Bush throughout the campaign. In a show of party unity Buchanan was awarded the opening night keynote at that year’s GOP convention. He delivered a “culture war” speech that Bush loyalists believed contributed to his loss.

As an incumbent, Trump already wields control over the Republican National Committee, which voted last month to express its “undivided support” for Trump and his “effective presidency.” But he’s getting a boost from well-placed allies at the state level.

In Iowa, the state Republican Party adopted new rules more than a year ago to seize control of the delegate selection process in direct response to the messy convention floor fight in Cleveland in 2016. Virtually all of Iowa’s delegates had preferred Texas Sen. Ted Cruz, and they fought unsuccessfully to oppose Trump at the convention.

“It was embarrassing. It was troubling. To be honest with you, it made me mad,” said Iowa GOP Chairman Jeff Kaufman, a strong Trump supporter. “Donald Trump won the Republican nomination fair and square. That was about people not accepting a loss.”

The new rules, made in consultation with the White House, would make it much more difficult for a Trump challenger to install anti-Trump delegates after the caucuses. Smart campaigns with energized activists, like Cruz’s and Ron Paul’s before him, had been able to send their own loyalists to the national convention regardless of the wishes of party leaders or caucus voters. No more.

Kaufman said that technically, he and the rest of the state GOP would be neutral should Trump face a primary challenge. He makes clear, however, that he’s been a strong supporter of the president and doesn’t see a serious primary challenge on the horizon.

It’s much the same in New Hampshire, where party leaders must technically remain neutral to preserve their status as the first-in-the-nation primary. But the Trump campaign backed Saturday’s election of new state GOP Chairman Stephen Stepanek, who served as Trump’s state co-chairman in 2016.

Stepanek was the preferred choice over former state chair Jennifer Horn, who emerged as an outspoken Trump critic since leaving the chairmanship after the 2016 election.

Meanwhile, states like South Carolina and Kansas are openly discussing cancelling their primaries and caucuses, but the Trump campaign insists it is staying out of those discussions, noting that state parties in some states are required to foot the bill for nominating contests.

News On 6 Tulsa police are investigating a shooting near 61st and Peoria.

News On 6 Tulsa police are investigating a shooting near 61st and Peoria.
View More Stories

News On 6 Tulsa police are investigating a shooting near 61st and Peoria.

Joseph Holloway Tulsa police are investigating after two men allegedly stabbed each other during a child’s party near Pine and Yale, late Sunday evening.

News 9 News 9 Sports Director Dean Blevins and News on 6 Sports Director John Holcomb recap a huge weekend in Oklahoma football and look ahead to biggest games of next weekend in this week's edition of the Oklahoma Ford Sports Blitz.
View More Stories