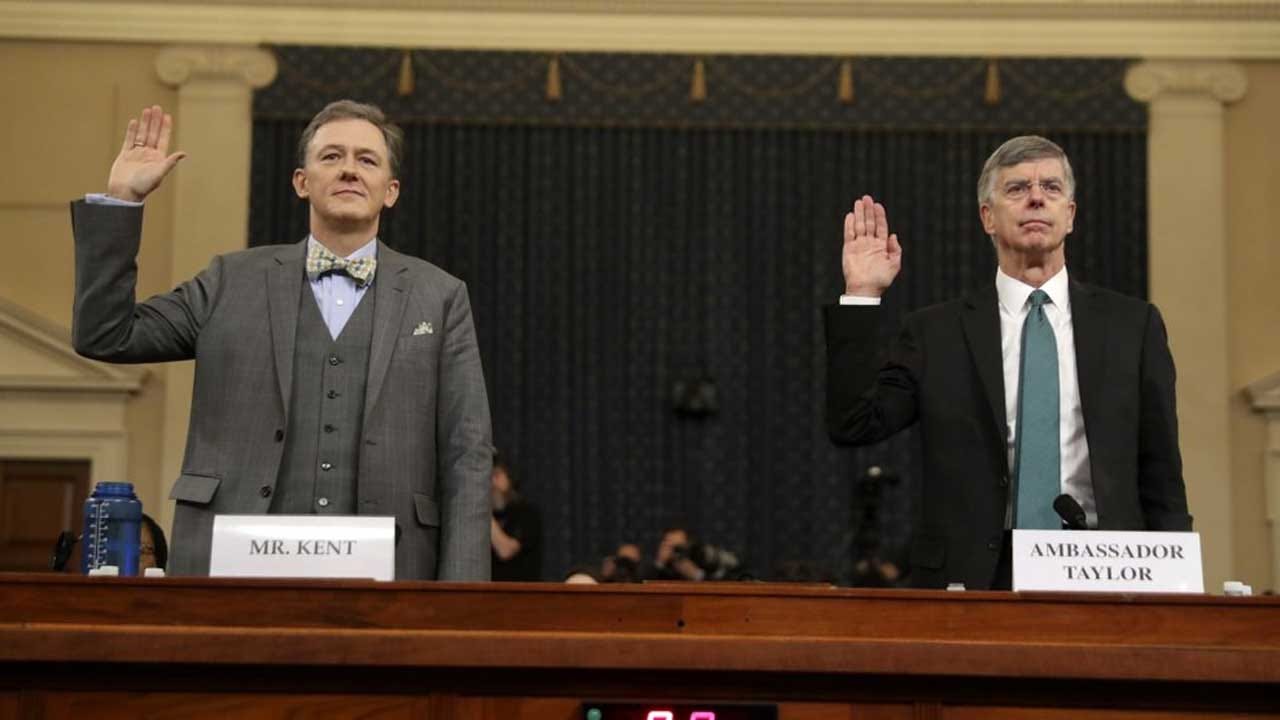 For the first time a top diplomat testified Wednesday that President Donald Trump was overheard asking about “the investigations” he wanted Ukraine to pursue that are central to the impeachment inquiry.

William Taylor, the top U.S. diplomat in Ukraine, revealed the new information as the House Intelligence Committee opened extraordinary hearings on whether the 45th president of the United States should be removed from office.

Taylor said his staff recently told him they overheard Trump when they were meeting with another diplomat, Ambassador Gordon Sondland, at a restaurant the day after Trump’s July 25 phone call with the new leader of Ukraine that sparked the impeachment investigation.

The staff explained that Sondland had called the president and they could hear Trump on the phone asking about “the investigations.” The ambassador told the president the Ukrainians were ready to move forward, Taylor testified.

Trump “would have a perfectly good reason for wanting to find out what happened” if there were indications that Ukraine meddled in the 2016 presidential election, he said.

The hearing Wednesday was the first public session of the impeachment inquiry, a remarkable moment, even for a White House full of them.

It’s the first chance for America, and the rest of the world, to see and hear for themselves about Trump’s actions toward Ukraine and consider whether they are, in fact, impeachable offenses.

An anonymous whistleblower’s complaint to the intelligence community’s inspector general — including that Trump had pressed Ukraine’s president to investigate Democratic foe Joe Biden and Bidens’ son and was holding up U.S. military aid — ignited the rare inquiry now unfolding in Congress.

The country has been here only three times before, and never against the 21st century backdrop of real-time commentary, including from the Republican president himself. The proceedings were being broadcast live, and on social media, from a packed hearing room on Capitol Hill. 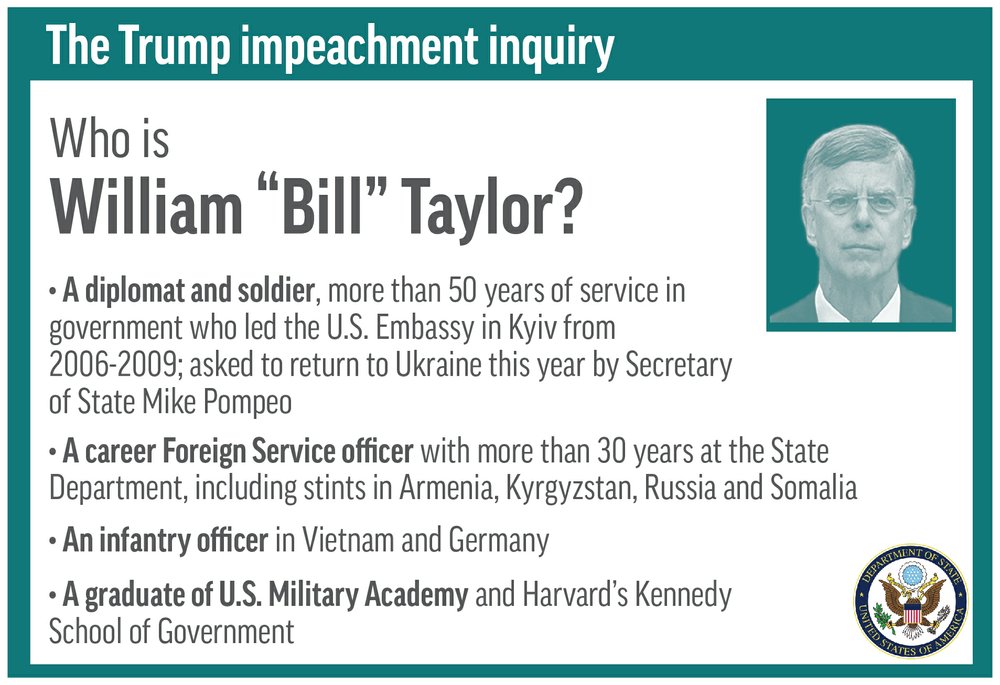 The session unfolded in measured, quietly dramatic tones. Taylor, a former Army infantry leader, his voice weathered after a 50-year career in foreign service, paused for sips of water during what he acknowledged was a lengthy recitation of facts. It took 40 minutes.

The scene, with Republican questioning still to come, was offering the credibility that Democrats wanted to set the stage and sway public opinions, but Trump still offered counter-programming.

Moments after the hearings began, his reelection machine sent out an email blast: “FAKE IMPEACHMENT HEARINGS HAVE BEGUN! ... I WANT TO RAISE 3 MILLION DOLLARS IN THE NEXT 24 HOURS.”

At the start, Rep. Adam Schiff, the Democratic chairman of the Intelligence Committee, outlined the question at the core of the impeachment inquiry -- whether the president used his office to pressure Ukraine officials for personal political gain.

“The matter is as simple and as terrible as that,” said Schiff of California. “Our answer to these questions will affect not only the future of this presidency but the future of the presidency itself, and what kind of conduct or misconduct the American people may come to expect from their commander in chief.”

Schiff denied the request at the time but said it would be considered later.

“We will do everything necessary to protect the whistleblower’s identity,” Schiff declared.

Rep. Nunes, the committee’s top Republican, accused the Democratic majority of conducting a “scorched earth” effort to take down the president after the special counsel’s Russia investigation into the 2016 election failed to spark impeachment proceedings.

“We’re supposed to take these people at face value when they trot out new allegations?” said Nunes, a top Trump ally. He derided what he called the “cult-like atmosphere in the basement of the Capitol” where investigators have been interviewing witnesses behind closed doors for weeks. Transcripts of those interviews have been released.

Nunes called the Ukraine matter a “low rent” sequel to the Russia probe. “Democrats are advancing their impeachment sham,” he said.

Both Taylor and the other public witness, George Kent, a deputy assistant secretary at the State Department, defied White House instructions not to testify. They both received subpoenas to appear. 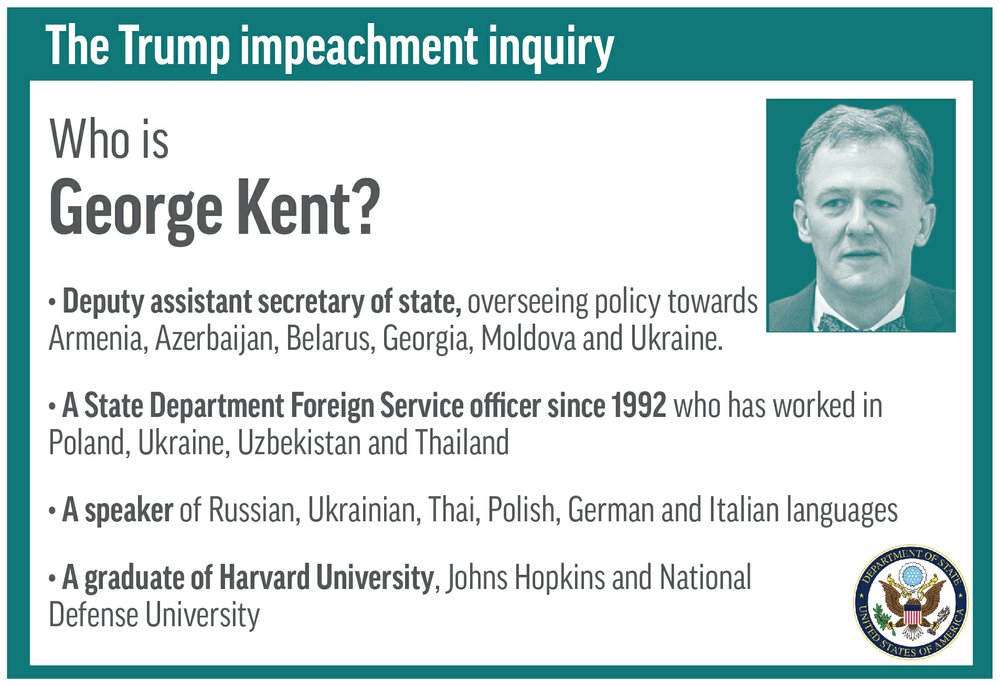 The veteran foreign service officers delivered heartfelt history lessons about Ukraine, a young and hopeful democracy, situated next to Russia but reaching out to the West.

Kent, in his opening remarks, directly contradicted a core complaint against Joe Biden being raised by allies of the White House, saying he never heard any U.S. official try to shield a Ukraine company from investigations.

Kent acknowledged that he himself raised concerns in 2015 about the then vice president’s son, Hunter Biden, being on the board of Burisma, a Ukraine gas company. He warned that it could give the “perception of a conflict of interest.” But Kent indicated no one from the U.S. was protecting the company from investigations in Ukraine as Republicans have implied.

“Let me be clear; however, I did not witness any efforts by any U.S. official to shield Burisma from scrutiny,” Kent said.

The career diplomat did not go into detail about the issues central to the impeachment inquiry, but he voiced his concerns with them.

“I do not believe the United States should ask other countries to engage in selective, politically associated investigations or prosecutions against opponents of those in power, because such selective actions undermine the rule of law regardless of the country,” he said.

So far, the narrative being unspooled in weeks of investigations for the inquiry is splitting Americans, mostly along the same lines as Trump’s unusual presidency. The Constitution sets a dramatic but vague bar for impeachment, and there’s no consensus yet that Trump’s actions at the heart of the inquiry meet the threshold of “high crimes and misdemeanors.”

Trump calls the whole thing a “witch hunt,” a retort that echoes Nixon’s own defense.

At its core, the inquiry stems from Trump’s July 25 phone call with Ukraine’s newly elected president, Volodymyr Zelenskiy when he asked the Zelenskiy for “a favor.”

Trump wanted the Ukraine government to investigate Democrats in the 2016 election and his potential 2020 rival, Joe Biden, all while holding as leverage military aid the young democracy relies on as it confronts an aggressive Russia.

The anonymous whistleblower first alerted officials to concerns about the phone call. The White House released a rough transcript of the conversation, with portions deleted.

Democratic House Speaker Nancy Pelosi was initially reluctant to launch a formal impeachment inquiry. But she pressed ahead in September after the whistleblower’s complaint.

Over the past month, witness after witness has appeared behind closed doors to tell the investigators what they know.

Whether Wednesday’s proceedings begin to end a presidency or help secure Trump’s position, it was certain his chaotic term had finally arrived at a place he could not control and a force, the constitutional system of checks and balances, that he could not ignore.

Unlike the Watergate hearings and Richard Nixon, there is not yet a “cancer-on-the-presidency” moment galvanizing public opinion. Nor is there the national shrug, as happened when Bill Clinton’s impeachment ultimately didn’t result in his removal from office. It’s perhaps most like the partisanship-infused impeachment of Andrew Johnson after the Civil War.