Behind The Hanukkah Tradition Of Latkes

After the second or two it takes to light a Hanukkah candle, what is the logical thing to do next? Eat – latkes, of course! Crispy, fried, slightly oniony potato pancakes with decadent (that's a euphemism for fattening) toppings.

Why latkes? The simple answer is that they're meant to remind Jews of the miracle of the oil associated with Hanukkah. But this story is anything but simple.

In 164 BCE, a devout Jew who called himself Judah Maccabee and his followers overthrew the Syrian Greek king who was trying to impose Greek customs and religion on the people of Israel. Hanukkah means "dedication."

"It commemorates the victory or the Maccabees, who retook the temple," said Jayne Cohen, a Jewish food historian and cookbook writer. "And when they re-sanctified the temple and cleaned everything, they needed ritual oil for the candelabra, and the only ritual oil that was pure enough was only enough to last for one day, according to the story."

But miraculously it lasted eight days. Centuries after the fact, Jews were told to celebrate by eating foods cooked in oil. But again, why latkes?

Enter Judith. "Judith was, according to all accounts, this beautiful widow," said Cohen. "And she set out to seduce Holofernes, who was holding the town of Bethulia under siege. And according to her plan, she had these very salty pancakes, levivot, and filled them with a salty cheese. And Holofernes, who intended to seduce or rape her, kept eating these. And he became so thirsty that he just drank incredible quantities of wine, until he passed out – at which point this beautiful widow chopped off his head!"

Correspondent Martha Teichner asked, "So, how does Judith get connected with Hanukkah?"

"That's where the bizarre part comes in," said Cohen. "Nobody is actually sure how the two became conflated."

But they did, and by the Middle Ages Jews in Italy were eating cheese pancakes during Hanukkah.

Now we come to the potato: Potatoes were cheap, and thanks to poverty among Eastern European Jews, potatoes became the key ingredient in latkes (Yiddish for pancakes).

Niki Russ Federman is a fourth-generation owner of Russ & Daughters in New York City. For 105 years, her family's business has been Jewish food. When asked by Teichner how many latkes they prepare, Federman replied, "On just a normal day, when there's no holiday, we make a thousand a day. And then during Hanukkah, we'll make 5,000 a day."

The latkes are made in smal

l batches, by hand. "You commune with the ancestors when you do this," Federman said.

If there's a secret to getting latkes right, it's straining out extra liquid.

The mixture is formed into patties, which are first fried on the griddle, then deep fried in oil (they use canola oil at Russ & Daughters). 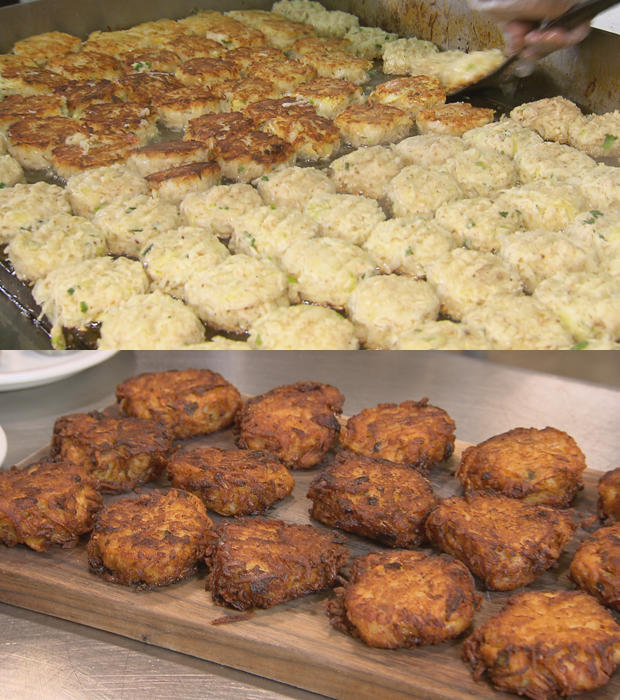 They're meant to be eaten crispy and warm.

"The story of Hanukkah and the latkes is one of perseverance and a little bit of magic and that's a universal story," Federman said.

Which is how the Brooklyn Museum justifies certain liberties taken by chefs participating in its annual latke festival. Have you ever heard of Vietnamese latkes? Or how about Korean sweet potato latkes?

Hanukkah is considered a minor holiday for Jews, but it's got this going for it: The Talmud, Judaism's book of laws, decrees that during Hanukkah there is to be no grieving, and no fasting. No problem, if the latkes are good and plentiful.