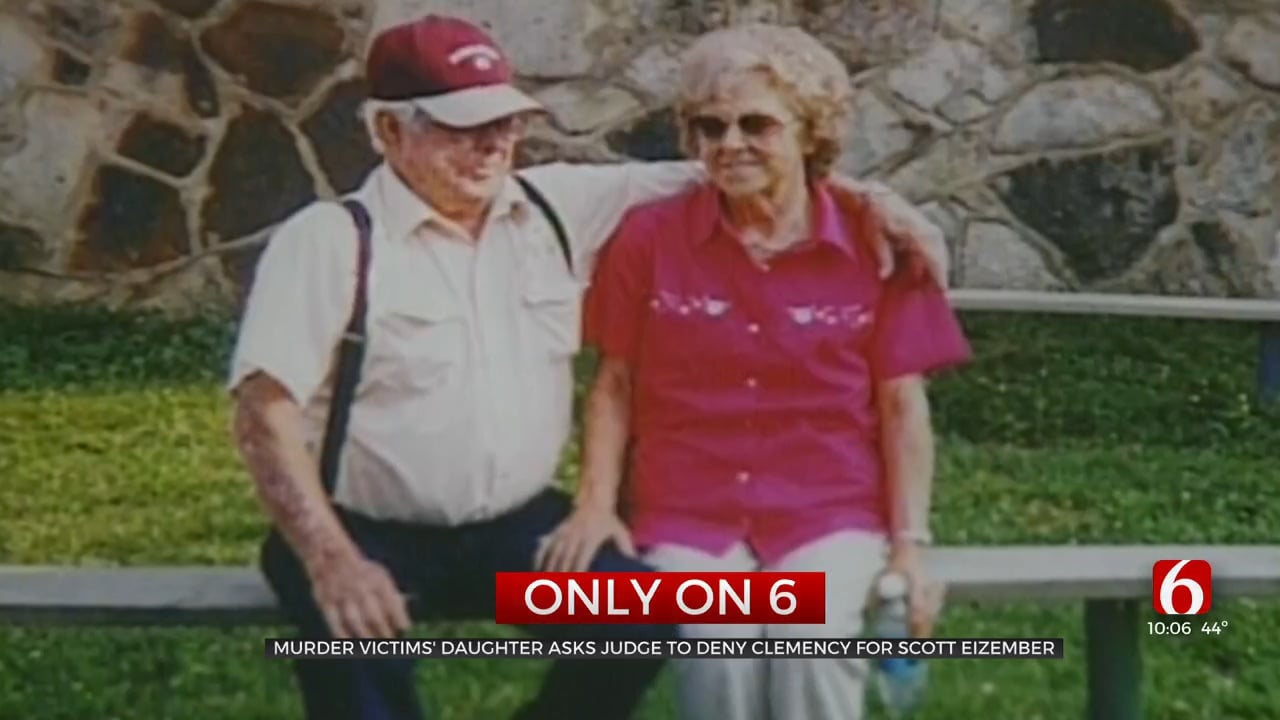 Scott Eizember has been on death row for 20 years and is scheduled to be executed in January. But first, he has a clemency hearing, where he will ask for the board to spare his life. However, the daughter of the two murder victims will ask the board to let Eizember's death sentence move forward.

Debra Wyatt has been fighting for 20 years for justice for her parents, AJ and Patsy Cantrell. She said she's relieved that fight is almost over and hopes the hearing is the last hurdle.

AJ and Patsy Cantrell had celebrated their 50th wedding anniversary. While they both had some health issues, they hoped to spend their golden years together.

AJ was a well known artist who painted signs all over the state and was a gifted musician who played guitar and fiddle.

Patsy was a substitute teacher who collected antiques and went all out to make holidays special for her three daughters.

"We had a wonderful life, my two sisters and I. We all had a horse that we showed in the fair and rode in parades. It was a gifted life, it really was," said Debra Wyatt, AJ and Patsy's daughter.

October 18, 2003, Scott Eizember went looking for revenge against his girlfriend, who had filed a protective order and turned him into police, after he held her hostage, beat her, raped her and threatened to kill her.

She fled to her mother's house in Depew. That house happened to be across the street from AJ and Patsy.

Eizember needed a place to watch. He broke into their home, found AJ's shotgun, loaded it and put two boxes of shells into his pockets. Eizember was rooting around in their fridge when they came home.

Patsy talked to him about her faith. Eizember said at one point, AJ grabbed for the shotgun and Patsy was shot. Then Eizember beat AJ with that shotgun and dragged both of them into the bathroom.

Eizember then drank a Dr. Pepper and ate some chips and salsa, while listening to AJ struggling to breathe.

Eizember has blamed others for his crime spree, including his girlfriend and even AJ. But Debra said there's only one person at fault.

"It was all him. You can't really blame it on anybody else but him," said Debra.

Eizember went across the street and shot his girlfriend's teenage son and beat her mother with the shotgun.

The son ran to his truck to get help and Eizember jumped in the back, as the boy rode through town. Eizember shot the boy again through the back windshield until the boy crashed and got help.

Eizember spent the next 37 days hiding from hundreds of officers. He stole food and clothes during the massive manhunt and eventually stole a car. When it ran out of gas, a kind doctor and his wife offered Eizember a ride.

But, Eizember forced them to drive him for the next six hours at gunpoint. He threatened to kill them, until the doctor pulled a gun and shot Eizember several times, which led to Eizember's arrest.

The jury found Eizember guilty. He got 150 years for killing Patsy, life for shooting the boy, 10 years for beating the mother, and death for killing AJ.

"The jury gave it to him, not us, the jury. And I think it's past time to carry it out," Debra said.

Debra said bloggers and others now say Eizember doesn't deserve to die. However, she said they are being swayed by Eizember's lies, playing the victim and talking about his sad upbringing.

She said a lot of people have it tough growing up, but don't commit violent murders.

"I wrote him a letter about half way through this deal and told him I forgive him. Not for him, but, for me," Debra explained.

She said once Eizember is executed, it'll be the end to what she calls the final chapter of the most horrifying experience of her life.

She's used her voice to be her parents' voice. Now she's ready to be done with this fight, years of trials, appeals, and court delays, so she can finally enjoy her own golden years.