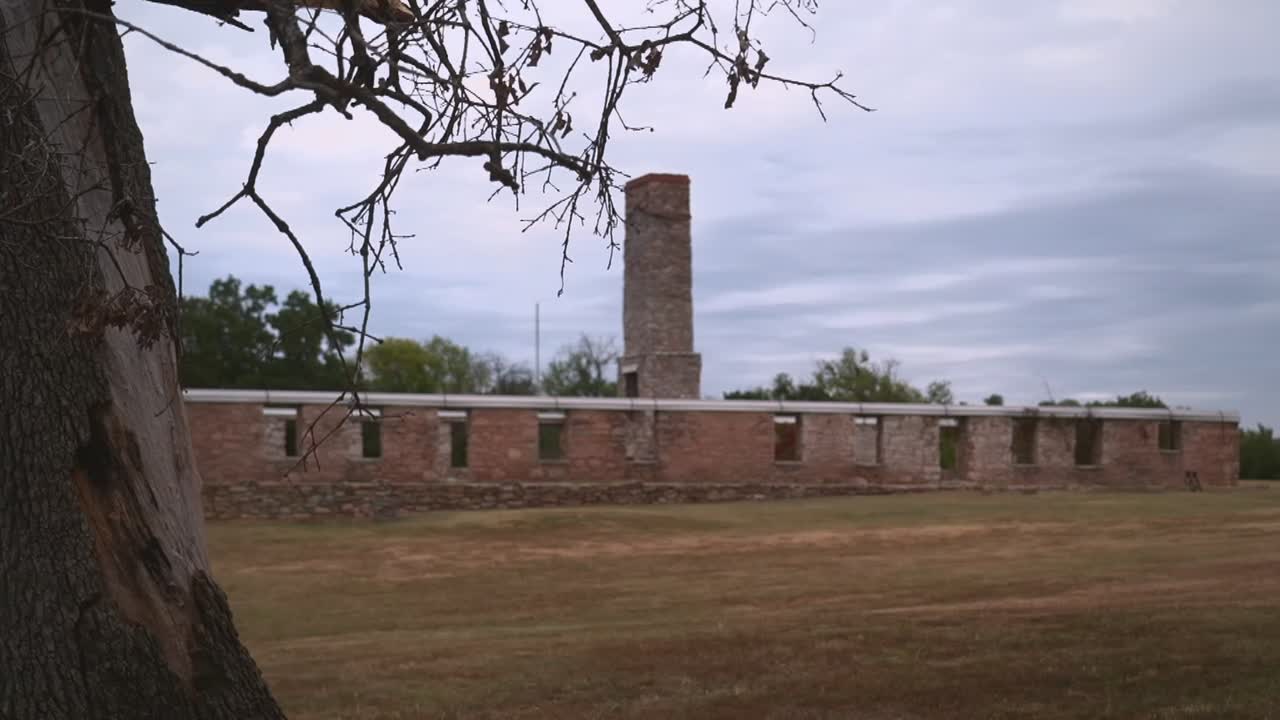 Smells of days gone by. Unexplained awakenings. Visions of people who have been dead for decades. The stories of Oklahoma's haunted locations go back to before statehood.

But to find the most haunted we enlisted the help of author Jeff Provine.

“Which is tough gig there's so many awesome stories to be told here in Oklahoma,” said Provine who has written eight books so far on Haunted Oklahoma locations.

“We're going to start at number nine: probably one of the most historical and famous stories the spook light up in the northeast part of the state,” said Provine. “You go out on this country road, and you see a glowing light, some people describe it as big as a beach ball some says it's just a little spot: red and green and blue all different colors.”

“Number 8 one of my favorite sights Ft. Washita,” continued Provine.

The former US military post built in 1842 War re-enactors frequent the fort often getting more of a history lesson than they bargained for. That includes two who were near this bridge when they saw a person holding a lantern.

Aunt Jane, a headless ghost, who's known to walk around this part of the fort is the most well-known. But there are plenty of others.

A security guard once noticed some soldiers on horseback.

“They rode right by him, he waved at them and they just kept riding and they went right through the fence and right to the road,” said Argo.

Multiple re-enactors have spotted an officer on the front porch of the barracks watching the sun go down.

“And when the sun went down the officer disappeared.”

But the Bohanan cabin is said to be the most haunted.

“Whatever it is, it don't like women,” said Argo. “The re-enactors who stayed in it had their clothing moved, reshuffled, sometimes torn up.”

Doors slam, windows rattle, a woman is sometimes seen sitting at this table.

Argo says even those who don't know the haunted history of the cabin have felt it.

“They can't breathe, they get a closed in feeling they can't stay in there.”

The Fort's ghost tour is a popular one. Argo says folks almost always see something or catch it on camera.

“I've seen pictures where mist took the shape of a little girl praying at a grave, I've seen mists that look like soldiers in line at the cemetery.”

But as quickly as those ghosts disappear so to the tickets. They are already sold out for 2022. Tickets for next year open on October 1 but typically sell out within a day or two.

Number seven is Cain's Ballroom in Tulsa where the music doesn't die even if the performers have.

“My favorite story about it is the famous country musician Bob Wills still shows up. He famously played there all the time during the 20th century,” said Provine. “He's still going on tour. And they recognize him it's his hat and his outfit. It's what he wore.”

Number 6 Kendell's Restaurant in Noble and the woman in black who cooks up mischief in the back room.

Elected to our number 5 position: The Governor's mansion in Oklahoma City.

“Governor Alfalfa Bill Murray from the 1920's and 30's likes to hang out there they say,” said Provine.

Number 4 is the 45th Infantry Museum. The memorabilia on display here aren't the only relics greeting visitors. Provine recounts this conversation workers had with a couple guests:

‘“The guy wearing a WW1 uniform standing out there in the front we tried to chat with him but he just stared and stared so we went on ‘we don't have any re-enactors’. So, he went to check and there was no one there.’

A failed government experiment, members of Oklahoma City elite still entertaining decades after their death. Things get even spookier Thursday night when we continue our countdown.

At number three: The parallel forest. A failed government experiment in the Wichita mountains.

“It's supposed to be haunted by these ghostly lights that people follow and get lost over and over again.

Our number two: an Oklahoma Mansion so grand the former owners just don't want seem to want to leave. Henry Overholser, often considered the father of Oklahoma City, his wife Anna and young daughter Henry Ione lived in the mansion in the early 1900's. And many say they still haunt it today.

Lisa Escalon, the museum manager began working at the museum back in 1993, and now she's on first name basis with many of the ghosts.

“I've heard my name called many times. It's a woman and I privy that to Mrs. Overhoser”

Mrs. Overhoser still seems to be the main lady of the house. She can also be often seen looking out the window of the third-floor torrent room and visitors sometimes catch a whiff of her rose perfume. But a slight smell of tobacco or the sound of whistling is often attributed to Mr. Overholser. Even reports of girlish pranks and a small footprint that mysteriously appeared in the dust this past winter seem to be signs that a young Henry Ione is here as well.

But paranormal investigators suggest many of the family's guests may have also returned to live out eternity here.

“They have picked up dozens and dozens of I would say types of activity in the home of small children to full grown adults,” said Preservation Oklahoma Executive Director Chantry Banks.

Pictures taken over the years show orbs and mysterious images throughout the house. Fortunately, guests, like the hosts, all seem to be friendly and helpful.

“I was turning off lights at the end of the night and was being lazy and across the room I said, ‘Ooh it sure would be great if someone would turn these lights off for me’ and the lamp the immediately turned off,” recalled Banks.

“The number one top haunted sight in Oklahoma I like to say pretty much is all of Guthrie just the whole town,” said Provine.

That sounds right to Stacey Frazier, she’s the founder of the Guthrie Ghost walk that now attracts about one thousand people and countless ghosts a year.

“It's the fact that the story become not only possible but plausible that really seems to draw people in,” she said.

Stacey says she has about 62 stories.

Ivan the barber is a popular one. When alive he had a habit of pinching young ladies.

“Even today it will be the guys that will be walking down the stairs that occasionally talk of someone pushing them and it will be the ladies coming up the step that feel like they get pinched,’ smiled Frazier.

Then there's The Stone Lion Inn which used to be a mortuary. Now a bed and breakfast. and the site of many unexplained phenomena. Including voices, furniture moving, doors slamming.

“There is a cat and it comes trotting down these steps, it turns here, crosses here and goes underneath and then it disappears and we don't see it more,” says owner Rebecca Luker.

The ghost of 7-year-old Irene seems to generate the most attention.

“People who sleep in that room the Cora Dial suite often experience an little child coming into the room between 2 and 230 and she pats them on the cheek to get them to come awake and when they come awake there's no one there but it's happened time and time again,” said Luker.

The Stone Lion Inn, Guthrie Ghost walk and many of the other haunts we have mentioned in our countdown offer opportunities to get up close and personal with the ghosts....if you dare.

Secrets Of Sasquatch: Are You A Believer?