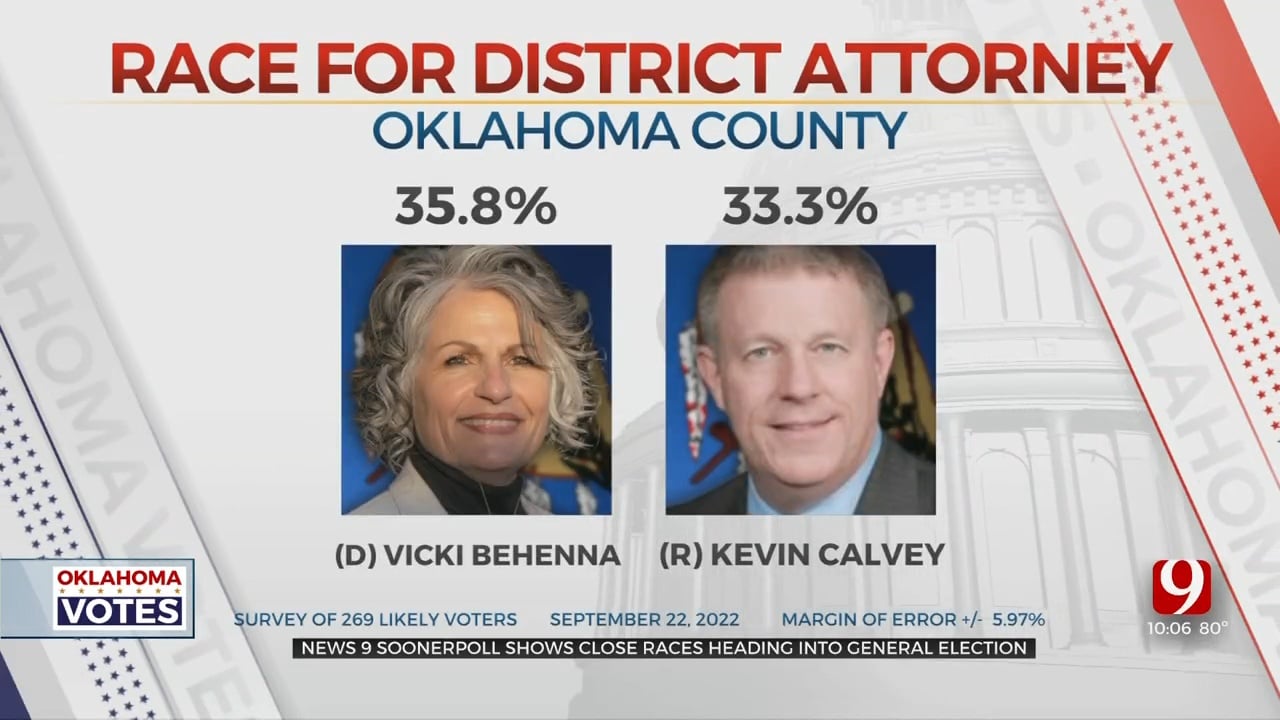 The race for district attorney is heating up, a News 9 SoonerPoll puts both candidates within the margin of error.

“I still feel like it is worth talking about the two points that spread the two candidates a part. The poll was weighted by age, sex and political party,” said Bill Shapard, the CEO of SoonerPoll.

He said it’s very likely this comes out as a 51-49% race. This is also President Biden’s first midterm election which could sway it towards Republicans depending on his approval ratings.

The News 9 SoonerPoll made up of likely voters in Oklahoma County is painting a picture of what the District Attorney race could look like.

“Republicans make up 51% of this poll and Democrats are 36% because Republicans still outnumber Democrats in this county,” said Shapard.

When asked who they would vote for if they were in the booth, 35.8% said Democrat Vicki Behenna, while 33.3% said Republican Kevin Calvey.

“While many may think that this is a very Republican state therefore it should be a Republican county, we do know that OKC for example which makes up the better of the county has been slowly going blue,” he said.

“While it’s still is heavily Oklahoma City, it does have some suburban areas, it does have a little bit of rural areas, and that is where the fight will be,” said Shapard.

The rest said they need more time to decide.

“A lot of those suburban areas voted democrat and against Donald Trump just two years ago. A lot of the question is will they come back? Will they now support Republicans this time around? I think the numbers show that the race is very close,” he said.

We reached out to both candidates for a statement on the News 9 SoonerPoll.

“Oklahoma County is ready for proven leadership in the DA’s Office. Vicki Behenna has over 25 years of experience as a federal prosecutor, including her work to convict Timothy McVeigh for the Oklahoma City Bombing, and as Executive Director of the Innocence Project. Kevin Calvey is a career politician and lobbyist who has never tried a single criminal case in Oklahoma. These poll numbers show that Oklahomans know how critical it is to elect a thoughtful, experienced District Attorney with so much on the line. We need a District Attorney who will lead with integrity and fairness for everyone. Vicki Behenna is the only qualified candidate in this race who is prepared to do just that.”

While the Campaign for Kevin Calvey said:

"These numbers show a statistical dead heat when the candidate's political party is not identified. Oklahoma County has more Republicans than Democrats so, if party identification had been used in the poll, we would have seen Republicans across the board go up several points. Even the pollster himself says this poll is not a good indicator of what will happen on Election Day.  We knew this race would be competitive from day one so this poll should serve as a wake-up call to Republicans -- every one of us must turn out to vote. If we don’t, we will end up with another soft-on-crime Democrat D.A. If that happens, mark my words, Oklahoma City will end up a haven for dangerous criminals just like Los Angeles.”