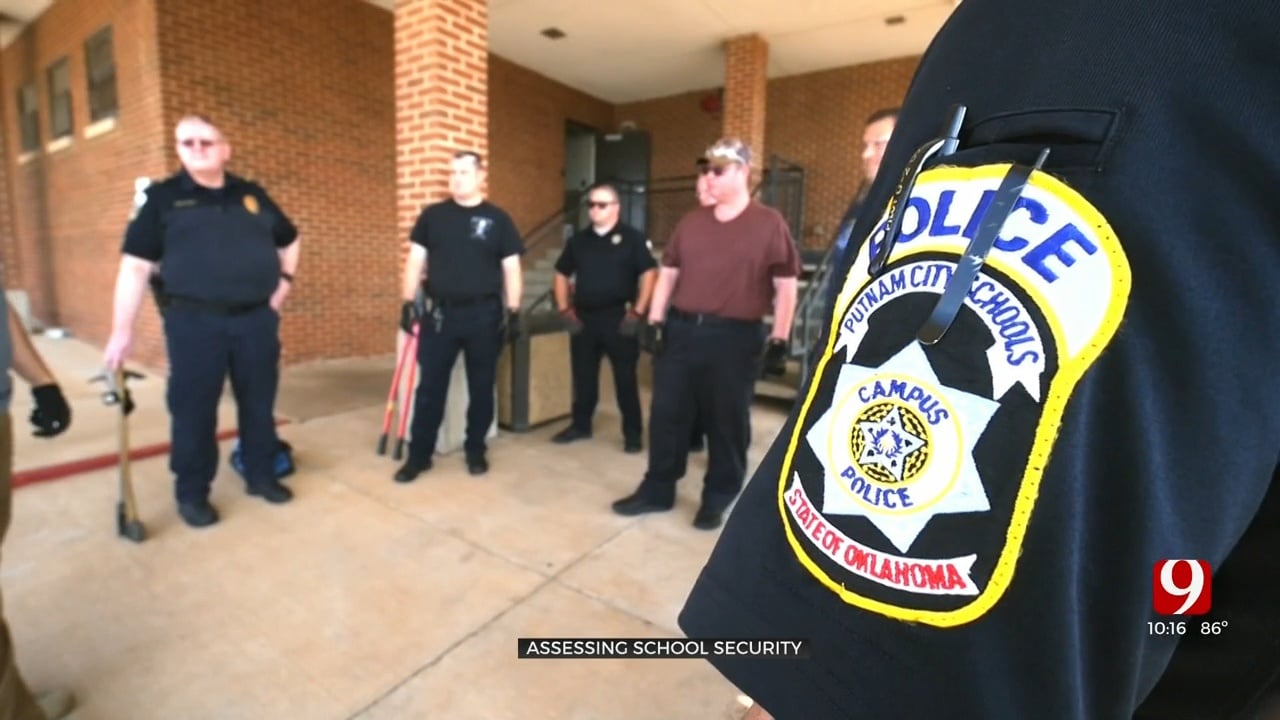 Oklahoma students start heading back to school this week for the first time since the Uvalde shooting in Texas put school safety back under the microscope.

“We know that kids, if they don’t feel safe inside their building they’re not going to learn,” says Gary Shelton. He heads up the Oklahoma School Security Institute a division of the Oklahoma Office of Homeland Security. Part of their mission: conducting risk and vulnerability assessments. For an elementary school, he'll spend half a day doing an assessment. Bigger high schools will take a full 8 hours. And when he's done, he'll compile it all into an extensive report. For an average elementary school, about 30 to 40 recommendations.

“The message we try to get across is we’re not coming in with a gotcha mindset,” says Shelton. “That’s not why we’re doing this we’re not coming in from a mindset of hey we want to help; we want to try and make your school more secure. And most of the things we’re going to tell you, 90% of the things we’re going tell you are probably not going to cost you any money.”

“If we look at all these events that occur if it’s a locked door, they bypass it. They have one goal in mind and unfortunately that goal is to do as much as they can in the least amount of time.’

During a walk-through News 9 did with Shelton we found a door propped up by a chair.

“They’ll find any object that they can…a chair, a stick,” said Shelton.

Norman public schools had OSSI perform risk assessments on all their schools last summer. Thanks to the passage of a recent bond issue, they were able to implement many of the suggestions.

And after a recent executive order by Governor Stitt mandating all schools have access to the OSSI inspections a lot more schools are taking advantage.

“Last year for the whole year we did 100 school sites. This year we have 80 school districts probably taking in close to 200 school sites, just in the last couple of weeks,” said Shelton.

In Putnam City, throughout the summer they inspected all the doors and fences and security systems. They also removed all door stoppers. Alarms were also added this summer that will sound if doors are left open. Doors without an alarm aren't allowed to be propped open without an adult employee standing next to it.

Doors and hallways are monitored by 1,700 to 1,800 cameras across the district all monitored 24 hours a day.

The State Department of Education asks all schools to do a safety assessment. It can also be performed by local law enforcement, fire departments or consultants.

Law enforcement is also increasing their preparedness. In Putnam City, where the district has its own police department, officers are going through forced entry training. That's new this year.

“That training is meant for the officers to get through basically any type of barrier that would keep us from getting to students or staff that are in danger,” says Chief Stout.

In addition, all officers will be assigned equipment that can help them breach doors or go through walls.

“We felt like due to recent things that have happened across the country we feel like it’s important we have this ability,” explains Chief Stout.

After Uvalde, the Oklahoma City Police Chief sent a letter to all command staff asking them to step up efforts. That includes a walkthrough of schools by the actual officers who would be responding to an emergency. Allowing officers to familiarize themselves with each school....

All enhancements, tools and training they pray they never have to use.