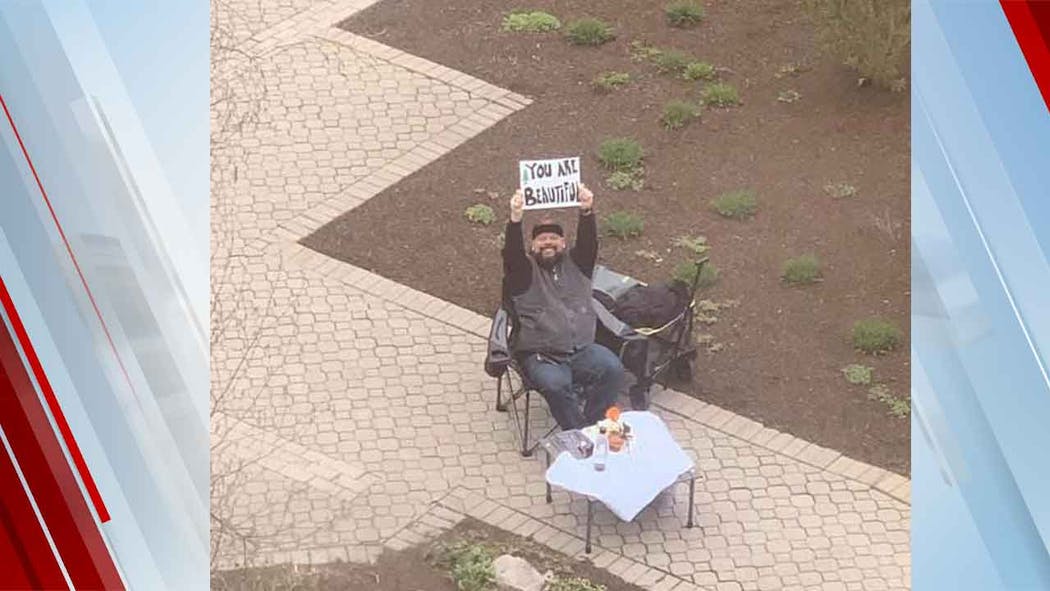 Shona Moeller is in the hospital on bed rest as she awaits the birth of her son, Forest, and due to coronavirus restrictions, she's not allowed to have any visitors. But her husband, Bob Conlin, is making sure she's not alone.

Conlin knew his wife would be in the hospital for a while. So, he started visiting her for social-distancing "date nights." He'd bring signs and food and drop of treats for his wife, who stayed in her hospital room while he dined down below.

"Shona and I have been married almost three years and date night is something we always did anyway. And it seemed like this would be a way to keep the tradition going and still connect and be with each other," Conlin told CBS News.

Conlin, a relationship coach, says he and his wife preach being intentional when giving and receiving love, and making it special.

A few weeks into her hospital stay, Conlin asked his wife out on a "date." She assumed it would be over Zoom, but instead, he picked up food from her favorite restaurant and dropped it off with hospital staff. Then, he set up a table below her window.

"I wanted her to feel special and loved," Conlin said. "She's in there by herself and she can't even leave her room. She's going to be there, we're hoping for just three months. We're halfway there."

Conlin said the "date nights" give Moeller a bit of a respite and a return to normalcy as she awaits the birth of their first child at AMITA Health Adventist Medical Center in Hinsdale, Illinois. Fortunately, Conlin will be able to attend the birth of their baby and will essentially move into the hospital with Moeller once she goes into labor.

Moeller is in the hospital because her water broke prematurely at about 20 weeks. "She can go into labor at any minute," Conlin said, adding that the couple hopes Moeller makes it to at least 32 weeks, which is when they can have a planned C-section.

Her official due date is August 10, but the couple now expects she will give birth by June 29th. "At about 34 weeks the baby is safer out of the womb than in," Conlin said. "So in a situation like ours, which is very rare, they would induce and have the baby born."

While they await the birth, Moeller can look forward to seeing her husband outside her window three or four times a week, with special "date nights" held on Saturdays. They include a little something extra, like flowers and other surprises.

In addition to being a relationship coach alongside her husband, Moeller is also a teacher and has been doing remote learning from her hospital bed. Friday is the last day of the school year, so Conlin got Moeller a piñata to celebrate.

"I'm actually on my way to the hospital now with the piñata, and I'm going to have her direct me how to hit it," Conlin told CBS News.

After posting photos of his various "date nights" on social media, Conlin has gained widespread attention, which he calls "humbling."

"All we've done is just share our love for each other in such a scary time for us and it helped to share our story and what we were going through," he said. "And so many people lifted us up in every way imaginable."

"I think why this story is getting so much traction is: I think it's a story of hope," Conlin said. "It's been our hope that our baby will make it. And so far he has. Everyone is going through something right now, and I think our hope is giving people hope in their own lives to get through this pandemic and whatever else people are struggling with."