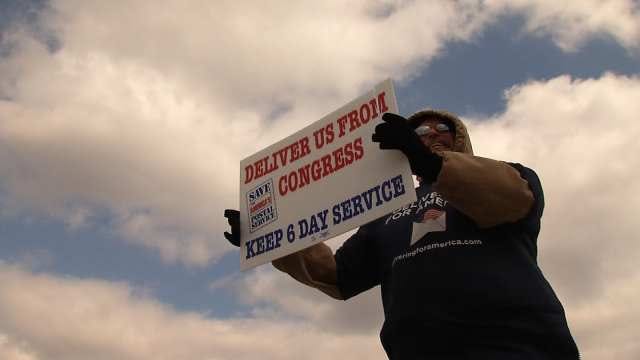 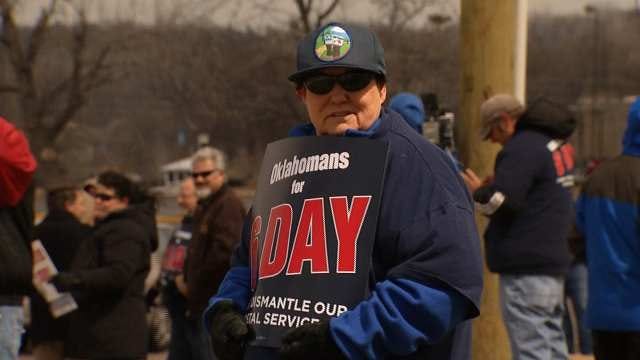 Dozens of letter carriers braved the cold to fight for Saturday delivery.

Last month, the U.S. Postmaster General announced plans to do away with the service.

Postal workers fear the end of Saturday delivery could also mean the end of the USPS,so they're rallying for support from Tulsans and Congress.

True to their motto, the brisk wind and chilly temperature couldn’t keep area postal service supporters from fighting for the agency they all love so much.

"All we do is provide a service,” retired USPS worker John Harrison said. “We're connecting people in this country and overseas that are serving this country with mail.”

The USPS is known for having longtime, dedicated workers.

"I feel like by cutting Saturdays is just the beginning of other cuts and it's just the start of taking away the service,” retiree Linda Culp said.

The signs said it all, “USA for 6 day” and “Don't dismantle the postal service.”

These workers said they've dedicated their lives to delivering for Americans and now they're asking to be delivered from Congress.

Harrison believes a 2006 mandate to pay $5.5-billion a year in future employee health benefits is the real reason the agency is failing.

"We would like our congressmen to quit thinking that it's the decline in mail volume that's causing the post office to go broke and wake up to the fact that it's that assessment and work on repealing that,” Harrison said.

Terry Davis of the National Association of Letter Carriers said, "I just ask Congress to do the right thing. Fix that mandate before you try to do anything to service. We have no support from any congressman or senator in Oklahoma on this."

But this group does have support from State Rep. Eric Proctor.

"Without the postal service, small business growth declines, which ultimately hurts the economy,” Proctor said. “It's just like throwing a rock in a pond and the ripples go out. It hurts everybody."

That's why group is asking you to contact your Congressman and tell them to keep Saturday delivery.

The union's local president plans to speak with Congressman Jim Bridenstine on Monday.

They're hoping he, Jim Inhofe or Tom Coburn will sponsor a bill to help keep the Saturday deliveries coming.