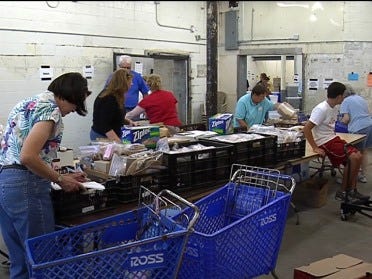 OKLAHOMA CITY -- A local food movement has hit the Sooner state and more Oklahoman's are demanding locally grown produce. The high demand has directly impacted the state's farmers, especially those who belong to the Oklahoma Food Cooperative.

"One farm, one meal, one family at a time we are changing the way that Oklahoma eats," Bob Waldrop President and General Manager of the Oklahoma Food Cooperative said.

The co-op is in its sixth year, but recently its sales have grown as much as its variety. Waldrop said this year's sales should reach $1 million dollars and last year producers sold as much food as they did in the first three years combined.

"Every penny of that $60,000 or so for this month goes from Oklahoma City and Tulsa to rural areas. It goes to places like Helena and Waynoka and Hollis," Waldrop said.

"It's amazing how they pull all this off every month," Crain said. "For us it's the best single outlet that we have as far as being a farmer and a marketer."

Crucial to the co-op's operation is its Web site. Each month customers log on and order from more than 26,000 items for sale by more than 100 statewide producers. Then every third Thursday producers bring those items to an Oklahoma City distribution center and sort them.

"We couldn't do it without the Web site because we disperse throughout the entire state," said Enid farmer Paulette Rink. "There's no way we would be able to do it via phone call with the amount of orders that we have."

"It sure cost a lot less to the environment to get it to me and it's supporting an Oklahoma farmer," Jenson said. "I'd rather pay a little bit more and know that I'm getting those two benefits on my cantaloupe."

Waldrop said he hopes one day neighborhood co-op grocery stores will develop from the current system.