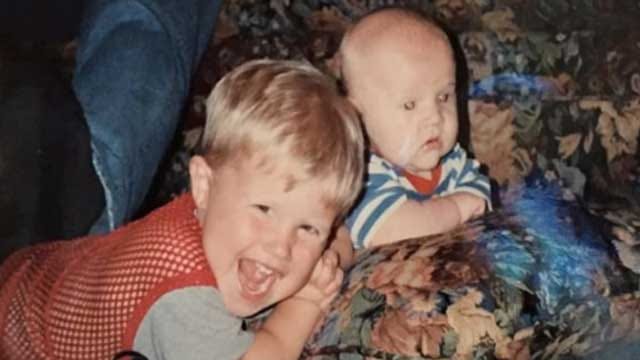 Edye Lucas has been to every single memorial service for the past 20 years to honor her sons Chase and Colton. And many remember the blond hair blue-eyed boys as two of the 19 innocent children who died that terrible day.

“There's not a day that goes by that I don't think about Chase and Colton,” said Lucas, “But I don't dwell on the bombing, or the fact that they're not here anymore - because I just have so much to be happy about.”

She still lives in Oklahoma, down near the Washington/Purcell area raising a teenage son, a 10-year-old daughter, and a house full of animals. Edye had Glenn and Emjay after the bombing, but said she gets constant reminders of the two little boys she lost in the blast.

“I feel like Chase and Colton are definitely with me every day, “ said Lucas. “I almost get signs from them because I see the number 9:02 everywhere I go. I see it on hotel room doors, I see it on license plates, I see it on mailboxes, I see it at different farms we go to, it's always there! I also always notice the clock at 9:02 AM and 9:02 PM every day.”

Lucas said April 19th, 1995 started out just like any other morning. She was 22, divorced with two children, and working at the IRS building along with her mom. The building was located just a few blocks away from the Murrah Federal Building.

She said she had just bought a house, and only intended on being up at the office for a little bit to celebrate her upcoming birthday with co-workers. So, she dropped Chase and Colton at the American Kids daycare, planning on only keeping them there part of the day. She remembered walking to the conference room to blow out the candles on her birthday cake when the bomb went off.

“I look back now and I think why didn't I just stay home,” said Lucas. “ Why? Could have, would have, should have - and I didn't. And what happened, happened.”

Pictures of Chase and Colton can be found throughout her home in artwork on the walls, and even snapshots on the fridge alongside pictures of Emjay, Glenn, and the rest of the family. And though she shares home videos of Chase and Colton on social media from time to time, she said it's difficult for her to watch them.

“Just seeing them in motion, and hearing their voices, and watching them run and play,” said Lucas, as she looks off into the distance. “That's hard.”

Edye is now an equine dentist, and said her focus now is making a good life for herself and her children.

And she has been inspired by the people who reached out to all the families in the days, weeks and years after the bombing to lend a helping hand.

“It was just never ending,” remembers Lucas. “The outpouring of love and compassion from everyone was amazing.”

Lucas said that is what helped her and others heal and move on. And to remind them that they are not alone, and that their loved ones will never be forgotten.

She said both the memorial and the museum are a testament to that.

And Lucas said she often finds little tokens left behind along the fence or on the chairs for Chase and Colton. And that makes her smile.

“It's sacred ground,” said Lucas. “And it's such an honor to have that to memorialize my children forever and ever because it's going to be there forever.”

She said she was looking through Instagram the other day and noticed pictures of Chase and Colton that other people had posted, along with the children they had named after her two boys. She said that is also a great tribute to her boys and another personal way to keep their memory alive for years to come.

Edye's mother, Kathy Sanders, also wrote a book recently about her memories of the bombing, and how she came to forgive Terry Nichols for his part in it. She too will be alongside her daughter when they read some of the names of the 168 lives lost in the bombing during the 20 year anniversary service.