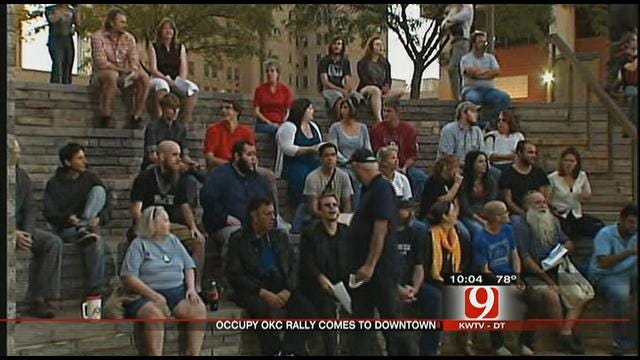 It is part of a movement called Occupy Wall Street, which is spreading across the country.

From Chicago to Los Angeles and New York to Washington, D.C., people have been gathering to protest the present distribution of wealth and what they are calling injustices on Wall Street. That movement has found its way to the capitol of the Sooner state.

The movement started out small but soon grew large. The movement is not over a uniform issue everyone can get behind.

"I think it's an outrage ... the gap wealth and wage in this country is immoral and unjust, and I'm here to put an end to it," said Bailey Grogg, Oklahoma City college student and political science major.

Other protestors expressed concerns about government serving the people.

"I feel nobody listens and nobody cares about my needs or welfare because I don't have millions of dollars to throw around," said protestor Maureen Dutton.

Organizers said the purpose of today's session is to get everybody together, to listen to their concerns, and to attempt to come to some sort of consensus.

Most people News 9 spoke with had issues over distribution of wealth, but others came with separate issues such as promoting green jobs.

Protestors spent the evening listening to one another's concerns.

"We're having to live well beyond our means in order to put me through college, and I think that's a sad fact for most Americans today," said Grogg.