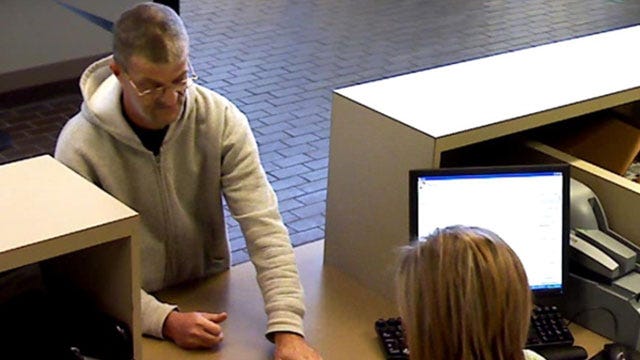 The FBI is hoping a very clear picture will lead agents straight to a bank robbery suspect who told a bank teller he had a bomb.

On the afternoon of Thursday, January 5, the man walked into the Bank of Oklahoma on Midwest Boulevard in Midwest City. He handed the teller a note that read "Give me the money in the drawer. I have a bomb."

The bank employee complied. The robber took the cash and left the bank. Tellers never saw a weapon or an explosive device. No one was hurt during the robbery.

The robber is described as a white man in his mid to late 50s with a scruffy beard. He stood approximately 5 feet 10 inches tall and weighed about 160 pounds. He was wearing a gray hooded sweatshirt, blue jeans and glasses.

The FBI has released a photo of the suspect, hoping someone will recognize him.

The FBI is investigating the robbery along with the Midwest City Police Department. Anyone with information about the robbery should call the FBI at (405) 290-7770. It's a 24-hour number and the caller can remain anonymous.