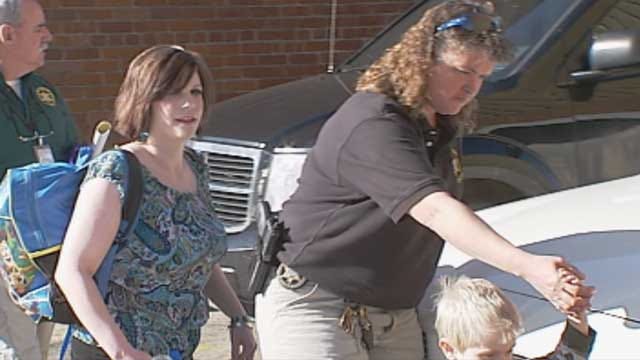 A mother who was on the run with her son turns herself in to federal authorities.

Kayla Harmon maintains she went into hiding to protect her son from abuse. Harmon says she believes her son is being abused by his father but authorities wouldn't listen to her concerns.

She finally agreed to turn herself in Thursday afternoon, under the agreement that he wouldn't be immediately returned to his father.

"They are going to help me," Harmon said as she walked into the U.S. Marshall's office.

Harmon says she is trying to keep a brave face for her 4-year old son Benjamin, who she will also be handing over to authorities.

She took Benjamin, against a court order, on February 2 after she said Benjamin told her his father was abusing him. She says the McAlester police refused to help even when she presented them with an audio recording.

"He tied me up and put tape on me," said Benjamin in the recording Harmon provided to News 9.

Harmon showed us pictures of the alleged abuse in the past.

"I got the right law enforcement involved," said Harmon Thursday.

Harmon's attorney says it is their understanding that Benjamin will not be immediately returned to his father, and instead forensically interviewed by an independent doctor about the abuse.

Harmon was taken into custody and will be extradited back to Pittsburgh County.

Her attorney points to an Oklahoma statute that says a parent can violate a court order if they believed "the act was necessary to preserve the child from physical, mental or emotional danger."

She hopes that will keep Harmon from being prosecuted. A DHS spokesperson confirms Benjamin is in their custody.

Workers from two different child advocacy centers will work with him to make sure there are no issues surrounding the case. These will be independent doctors contracted by the agency.

DHS says police are required to notify them whenever someone comes to them with allegations of abuse.