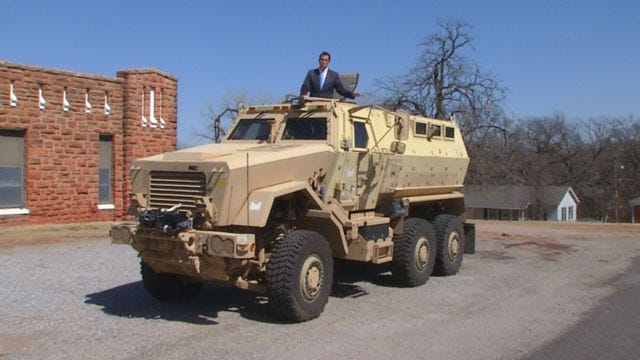 The police department has a new tool to fight crime in Guthrie and it comes to the city through a military surplus program.

The armored vehicle will not be used for regular patrol, but Police Chief Damon Devereaux said it would be utilized in some situations.

The Mine Resistant Ambush Protective once patrolled in the Middle East. Now it will protect Guthrie's Streets. From SWAT situations to standoffs to rescue missions, the MRAP will be a huge tool in getting the job done safely.

"It's the best way to put people in harm's way safely. Or get them out of harm's way," said Devereaux.

"If we have a subject that's in a house that's barricaded in the house, a bad guy, we can drive this to the neighbor's house to get them out safely we can use it to get close to the house to start communication with them."

Devereaux said the obvious use is extra protection during active shooter situations, but it has far more uses.

The price tag for one of these is $733,000 for the military, but Guthrie police only paid $2,000 using seized drug money from past operations.

"If we have to use this vehicle one time, it's paid for itself," said Devereaux.

The Police Department plans on making some changes to the vehicles to better serve the area. It will also be available to other communities in Logan County if an emergency situation warrants it.