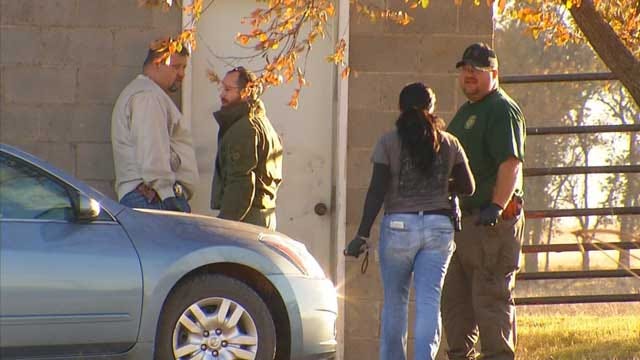 A Chandler woman is found dead and police say the death is suspicious. But no one seems to know what happened, and her family doesn't believe this is an accident.

Kathy Wilkins Myers' body was discovered Friday morning inside one of her outbuildings, and News 9 is told she was dressed for work, supposedly about to head to Oklahoma City.

“Everybody has a different idea about what really happened to her,” said a neighbor who did not want to be identified.

News 9 was told a neighbor discovered Myers' body while checking on her because she didn't show up for work.

“Supposedly fell off a ladder and died,” the friend said.

But those who knew Myers don't believe that's what happened.

“She would have never been in that tack room on a ladder in her best clothes,” she said.

“I'm still in shock. I don't think a whole lot about it, but I don't think that she fell off the ladder and killed herself,” said Myer's father, Warren Armstrong.

Armstrong said he suspects foul play. And he said this isn't the first time the outbuilding has been searched by police.

“They found her car keys between the car and the building,” said Armstrong.

Shortly after News 9 arrived at the home Wednesday evening, Lincoln County investigators showed up appearing to serve a search warrant. Officers and sheriff's deputies went over to the outbuilding next to the home.

“We've had police, we've had preachers, we've had all kinds of different people coming to say, ‘Hmm, what's this all about,'” said the friend.

“I keep looking over my shoulder to see if she's going to holler at me, but like I say, ‘I'm still numb,'” said Armstrong.

Warren said his daughter recently divorced, and her ex-husband is now staying in the home. That man has not been named a suspect.

“He wasn't allowed to come around the property at all, and now all of a sudden, it's his,” said the friend.

The Lincoln County Sheriff said there is a person of interest, but a name has not been released. Several agencies are investigating and the medical examiner says Myer's cause of death is still pending.